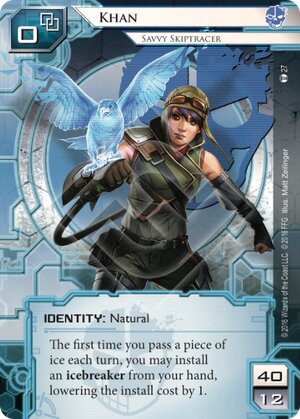 The first time you pass a piece of ice each turn, you may install an icebreaker from your hand, lowering the install cost by 1.

Been tuning up what I consider a best-case Khan & Birds system. It's actually produced a "shapery" rig with lots of actions that is quite fun to play. In this process, I've discovered perhaps Khan's biggest disadvantage. To articulate it, I'd like to describe what I think is Khan's ultimate board state--one that takes quite some time and credits to set up, but can be reliably achieved if the Corp isn't hyper-diligent in checking the runner's early-game run economy. Here's a link to the deck. I know, I know...it's really an Andy rebirth deck. Sorry.

The strategy is to set up a board state where rezzing ICE hits the Corp's bank harder than it hits Khan's, even after multiple runs. That's not how ICE is supposed to work for the Corp. Her "Vamp" rig includes 1) the GPS Breaker Birds, 2) Autoscripter, 3) Sahasrara 4) Temüjin Contract. When Khan breaks the ICE, she can pay 2 creds to derez, bouncing the Bird to the runners grip. Immediately, Khan can reinstall the Bird for free using her ability and Sahasrara credits, while gaining a click with Autoscripter. Upon successful run Khan gains credits from Temüjin to fund the next run. If Khan is already ahead in credits, the Corp may refuse to self-Vamp and not rez the ICE at all. This easy access can be used to lock HQ and sometimes gain enough credits for an R&D run each turn.

Here's the catch. Khan's ID only triggers the first time you pass a piece of ice each turn. All the Corp needs to neutralize this threat is to install a cheap ICE like Vanilla or Quandary above a piece of more expensive ICE. Then re-rezzing the first piece of ICE is cheap/free for the Corp and the entire threat is neutralized. Khan's ability is thus reduced to only gaining a click, but at a cost of 3 creds with a Bird Breaker. It ain't worth it. En Passant could be a good counter measure, but at 2 influence it is hard to justify in a strategy that is already needs so many economy and tech cards.

A strategy that requires so much investment, but is so easily neutralized...welp, it's just not that great. Moreover, a lot of great Corp decks use only light ICE. For those decks, you wouldn't want to use Khan's inefficient Birds at all and should probably rely on an AI breaker. For Khan's ability to really be worthwhile, it would need to be once per turn when you pass a piece of ICE rather than the first time you pass a piece of ICE. Perhaps it would even need to be once per run to be considered competitive given the setup investment, heavy economy requirement, and inefficiency of the Breaker Birds.

Still, Khan has a cool, interactive mechanic that can occasionally set up a devastating late game. She is fun to play, and I can't seem to give up on her.

(Intervention era)
analogBrad 166
I like her a lot. She is just super fun to use, though challenging. — quailman2101 11 Nov 2016
I wouldn't say that the threat is neutralised by using cheap ICE as the first piece of ICE you pass each turn, you just need to have two sets of birds. Take the case of a server with Vanilla and Tollbooth and all Birds installed. You pass the Vanilla, install a second Peregrine, then bounce one of the Peregrines during the derez. This is memory intensive, but Gauntlet and using Cybsoft MacroDrives instead of Sahasraras allows it. — manicmoleman 11 Nov 2016
@manicmoleman Thx for the great insight. I do have two sets of Birds so I will try this. I tried Cybsoft drives but they just didn't help enough for the initial Bird installs. One Sahasrara goes a long way in installing the programs while struggling for early economy. When I first saw Gauntlet, I balked at the cost. But after a second look, it would allow me to ditch an HQ interface and swap it for a Pheromones. Might even try two-for-two!! Thanks for your reply! — analogBrad 11 Nov 2016
No worries! I, too, am a little bit obsessed with making Khan 'work'. In my current build I'm spending influence on 2 Magnum Opera to fund the Birds and using Datasuckers to deal with awkward ICE. Having a Magnum Opus on the board really helps with when the Corp has locked you out of your Temujin server. — manicmoleman 11 Nov 2016
I have also begun playing with this build a little. Have you considered adding a compromised employee or two to the mix? If you're bouncing ice and getting the corp to re-rez, this helps some more. I've had very bad econ draw the couple times I've tried it. One game I had one one econ card in the first 18 draws. — wombat929 23 Nov 2016
4

Other than that, this is a fine ID. Noteworthy her minimum deck size, though we may consider her influence a drawback. Her ability is asking for a deck that abuses it. However, as good as it looks, it needs something to ensure it fires, such as Inside Job, or other breakers already installed.

(Blood Money era)
DarthIA 91
It's kinda feature regarding IDs (criminal feature, maybe), because Andromeda has "hand" word in her text box, too. — tilindir 22 Sep 2016
Why, oh why, did her title have to be "Savvy Skiptracer"? We already had a "Savvy Investor", was "Skiptracer" too boring? This irks me to no end, since names and titles are supposed to be unique. Poor Laramy Fisk. Not only does he not see a ton of play, he also gets his title overshadowed by the new girl here. — Drugs 18 Feb 2017
3

I'm going to compare her to two other runners. Geist saves you clicks by giving you free draw. Kate saves you money by lowering the install cost of hardware/programs. Khan gives you both. A clickless install with the cost lowered by one. Sounds great and indeed it is, warranting her lower influence. Let's talk about the limits on the ability though:

-It targets only icebreakers, not hardware, not even other programs.

-It only can be used once per turn. Of course it'd be nice if it wasn't restricted in this way, but it isn't too big a deal. You will only have so many icebreakers in your hand. You probably won't ever be using this ability on the corporations turn, unless they were to play An Offer You Can't Refuse and you take them up on it.

-You have to pass a piece of ice in order to use it. As icebreakers are what normally allow you to pass ICE this could be a bit of a problem early game. Of course some ICE doesn't end the run; you could run through a Pop-up Window and get the install after. I think a good choice would be to include three Inside Jobs to help you get set up early game. It's just a solid card anyway. Other choices would be Rigged Results and Femme.

Of course in order to justify using her as your ID (and accepting the lower influence), you'll want to make full use of it. Just using a standard three breaker suite is not going to be using her to her full potential. Here are the best options I can think of:

-The first thing I, and I'm sure most others, thought of was the criminal suite of “one-shot” breakers, Crowbar, Shiv, and Spike. Any of them would install for free and there are a lot of them. Once you have a few of these and some other icebreakers installed, they are super efficient, costing nothing to get through ICE. Because of this obvious synergy, I was surprised when I realized that Khan doesn't come with any link. This is an issue. You'll either need to include enough link cards to make sure you get the two required link early or enough extra memory. Going the link route, I think including three Rabbit Holes would be the only reliable way to go, maybe a Toolbox too. Otherwise you may find yourself unable to install your myriad of breakers. This will unfortunately eat up a chunk of your precious influence.

-Golden is her signature breaker and would be a good backup to your Shiv. Use Shiv for the small ones and Golden for the bigger ICE. If you have an abundance of money and you are facing an Archer or Janus 1.0, go ahead and use its powerful but costly derez ability, then immediately reinstall it for four creds. We will have to wait and see if they release a fracter and decoder of like kind. If so, they probably won't be any more cost effective than Golden. Criminals are after all known for their killers.

-Other potentially good breakers would be Chameleon or Brahman. You'll need most of your influence but it may be worth a try.

By way of conclusion: Khan is just super cool, I mean, she has a digital falcon on her arm.

(Blood Money era)
quailman2101 275
Link would have been nice. Even 1 link. It's her biggest problem. I'm sure the designers had a good hard think about that, though. — CascadeHush 7 Sep 2016