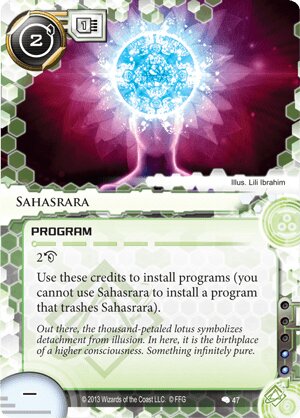 Use these credits to install programs (you cannot use Sahasrara to install a program that trashes Sahasrara).

Out there, the thousand-petaled lotus symbolizes detachment from illusion. In here, it is the birthplace of a higher consciousness. Something infinitely pure.
Illustrated by Lili Ibrahim
Decklists with this card

Sahasrara: aka "the White Lotus"

From Hindu tradition the Sahasrara or White Lots is described as having 1,000 multi-colored petals located just above the top of the head. Sahasrara symbolizes detachment from illusion; an essential element in obtaining higher consciousness of the truth that one is all and all is one. Sahasrara is an economy program definitely worth a look.

Sahasrara can pay additional copies of itself to be installed, ramping up an economy quite quickly.

Chameleon can pop onto the runner's deck turn after turn at no cost out of the runner's hand. Even more powerful once 1+ copies of LLDS Processor are in the runners rig as well.

Make money: Sahasrara in combo with Aesop's Pawnshop & Scheherazade will open up a large suite of programs that can be used for their effect then sent to the heap effectively netting the runner the equivalent of a Sure Gamble each time this cycle is run. Self-modifying Code and other tutoring or recurring methods could keep this cycle well supplied

2 frees up some economy to focus on runs & other expenses each.

Return on investment turn around happens the first time it is used.

1 requires careful management especially in rigs where s are tight

Shaper decks in particular often feature installation-based synergy and so could have a lot to gain by including Sahasrara, the sooner in the game the better. If the runner has the available deck slot(s) & this card can offer a lot even if not supported by a specific combo.

(Data and Destiny era)
chris_walker 682
Combos well with Kaplan and Chameleon for the costs of installing a unusual breaker suite in a LLDS Processor deck. — Goldstep 30 Nov 2015
Thanks Goldstep, that's pretty cool combo! — chris_walker 30 Nov 2015
Can someone clarify if Sahasrara can be used in combination with Savoire-Faire/SMC/Clone Chip/Khan? Naively one would think it could, but as with the UFAQ ruling on using scrubber credits with PolOp I don't think you can use these credits to pay for the "abilities" of these cards. If so I (and I'm sure a few others) have been doing a fair bit of cheating (and still losing) — Difrakt 16 Aug 2016
In response to Difrakt's question: you can use Sahasrara credits to pay for install costs, but not for the cost of the installer's ability. I.e. you can use the creds to install a Cyber-Cypher with a Self-Modifying Code, but you can't use them to pay the SMC's 2 cred cost for a 0-cost program (e.g. Paricia). The point is that the install cost of the card isn't part of the ability cost of SMC, unlike PolOp. For PolOp, the trash cost of the card is a reference - imagine the cost was "Trash, X creds (X is the trash cost of the chosen rezzed card)" Scrubber/Whizzard can't be used because you're not trashing a card with those credits, you're paying the card cost (like the 2 creds for SMC) - it just so happens that the effect is the installed card is automatically trashed. — LeonardQuirm 7 Sep 2016
Haven't tried it out yet, but I think this would work well with Khan and her birds. — RexDolorum 5 Jan 2017