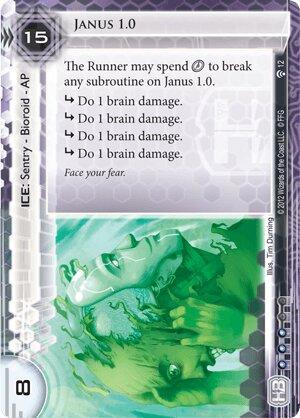 Face your fear.
Illustrated by Tim Durning
Decklists with this card

O' God of Gates, Tear my brain, Leave this fate, For nothing remain. From first entrance, To final exit, Leave this sentence, As I am hectic. Tell me Janus, One last cheer, Why so heinous? "Face your fear."

(The Devil and the Dragon era)
Guile&Filth 11

Beautiful! Where did you get this from?! Top of your head?

When this ICE came out, most who saw it immediately went ‘Wow! 4 brain damage! Probably at least one if I can rez it in their face!’With the exception of oneshot killers, it is a huge tax to get through. Eight plus credits it’s going to stop runners from running very often,until it gets Femme Fatale'd. The problem becomes that it is so expensive to rez, and even with the accelerated economies of modern corp decks, it still is a hefty chunk of change to let loose on.

Still, that doesn’t make it a bad card, just one that is hard to use. Eight strength and four subroutines, even as bioroid clickable subroutines, is pretty respectable for a fifteen cost piece of ICE, and given the fact those subroutines can have a very heavy effect on the runner might make it worth the cost.

Combined with cards like Brain-Taping Warehouse and Ryon Knight it could be a devastating combo, and those cards were likely printed to give Bioroid ICE like Janus a second chance.

(Chrome City era)
lynkfox 381
In my opinion a true demise of Janus 1.0 came with E3 Feedback Implants, Crescentus and Emergency Shutdown. But maybe it'll all change now that there are more brain damaging options. — chom 18 Jun 2015
E3 Feedback is really good against it. But Crescentus is hard to use at all against it. And Emergency Shutdown is good, but the Janus presumably got a good whack in first. — Glitch29 18 Jun 2015
This, plus Awakening Center, has netted me two flatlines so far. — Thaddux 19 Jun 2015
Can't wait for Janus 2.0: Costs 30 to reaz, 50 stength, 10 brain damage subs — NobbyNobs 10 Feb 2016
2

A powerful and game changing ICE, Janus has a natural home in Blue Sun. It's 15 rez cost is backbreaking to hard rez but one simple Oversight AI later and it's in the bank. In a kill oriented deck, the possibility of inflicting multiple brain damage means grinding the runner's handsize to almost nothing if it hits. If. Runners have multiple ways of getting through this. Shaper's have Deus Ex. Anarchs have Da4id (though they still have to click that last sub), and Criminals always use Faerie. However, in Blue Sun you can bounce the that curtain wall and bluff the janus!