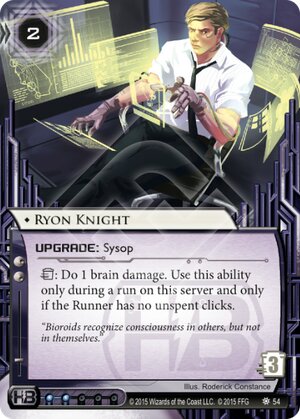 trash: Do 1 core damage. Use this ability only during a run against this server and only if the Runner has no unspent click.

"Bioroids recognize consciousness in others, but not in themselves."
Illustrated by Roderick Constance
Decklists with this card

Ryon Knight is a terrifying man.

It's not uncommon for a runner to cobble together a partial breaker suite for the bioroids they're actually afraid of, then click past an Eli or the like to get to your server's delicious creamy center.

Ryon fills that center with toothpaste. Brain damage is a serious deal, and for a whole two credits you can punish the runner for not having their entire rig up. If they run the server with clicks left over you can bet your shiny metal ass they're going to pay the three to trash him. He's going to die to Drive By when that drops in the next pack, but even that's not so bad when you consider that they're blowing two clicks to take out something you used one click on. You'd much rather he get shot than a Jackson Howard, for example.

He's very much at home in HB. Two influence is a pretty low cost splash, but outside of some Jinteki shenanigans I'm not sure where he fits out of faction. That being said, he's a great fit for Cybernetics Division: Humanity Upgraded and any deck that you want to toss some easy and affordable brain damage into.

(Chrome City era)
Chuftbot 822
You can run 3-of even though it is unique, because you will only ever rez him just before you pop him. — joemillions 3 Sep 2015
in CD, I had a rezzed Turing as the only ICE on my scoring server. My turn was: Install Vanilla over the Turing, Fast Track for Destructive Brainchips, install in the remote. He ran the server first click, using his SMC on the first ice and clicking through the Turing. He was surprised to find Ryon instead of the Fast Tracked agenda waiting for him. BLAMMO! — PureFlight 19 Sep 2016