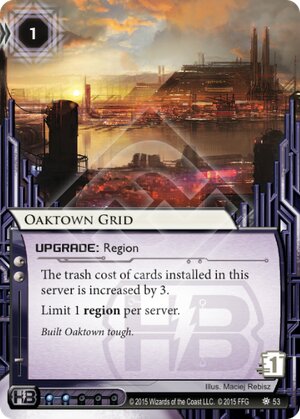 The trash cost of cards installed in this server is increased by 3.

Three Encryption Protocols in one! But limited to one server, and once that can't run other Regions at that. Probably for the best, since an 8-to-trash SanSan City Grid or Crisium Grid might cause a few sad faces at tournaments going forwards!

But oh, the things you could do with this server.

How about some Adonis or Eve Campaigns? You could even rez them for free using a Breaker Bay Grid, then overwrite it with Oaktown Grid. Even better, rather than trashing the Breaker Bay Grid, pull it back to hand with Blue Sun: Powering the Future - or if it's too much influence over there, keep it in HB with Isabel McGuire.

But we're thinking small. What's better than money? Time! Director Haas is an obvious target for the runner when rezzed, but if she's staying in Oaktown, she's a bit tougher to deal with. In fact, any of the top level executives could be fun to put in.

But still, there's more to be gained from this card. Because there's nothing stopping other non-Region Upgrades going in the same server. Ash 2X3ZB9CY is an annoying card at the best of times. When he costs 6 to trash, instead of 3? Red Herrings suddenly costs almost as much to trash as the agenda would be to steal. Strongbox too. Even relatively unused cards like Experiential Data may become worthwhile - it's worth trashing for 2, but is it really worth it for 5?

It's not all good, of course. While the trash cost of Oaktown Grid itself is a respectable 4 while installed, it's only 1 when it's in R&D/HQ, and that's always a weakness. And it's a card slot to boost other cards that, most of the time, are going to be support cards themselves. It could become a frequent cut 50th card.

But for the right Asset - and especially Upgrade - heavy deck that it makes it into at 49...well, the runner better hope they brought their Imps.

(Chrome City era)
LeonardQuirm 968
Well... The "worst" thing is that you can trash Oaktown Grid first and then you can trash other cards in the server with their regular trash cost. It's "just" a four credits tax. (unless paired with aforementioned Ash or - more jank! - Hudson). Oaktown is interesting but it's not as strong as you imply. :) — ike 4 Jun 2015
I've dropped this in my Director Haas deck for testing, because 8 credits (Or 9 if you're doing Oaktown then Haas) means she'll be alive a *lot* longer. And honestly, 8 or 9 credits spent, plus the run cost, is probably worth it for 2 points. People install NAPDs to be stolen for a 4 credit loss.... — Wookiee 4 Jun 2015
Ike raises an excellent point - I think I was thinking of it as a Red Herrings/Strongbox style effect which would stick out for the whole run, but it's not - access it first (and you can, because it has to be rezzed!) and trash it first, and it's gone. That said, I think a lot of my comments still apply - the Campaigns are usually worth trashing on their own, but are you going to pay the 9 to get rid of this + Eve? With Red Herrings, it's forcing the runner to make a decision: steal the agenda now and leave the Upgrades, or trash the upgrades and leave the agenda. Or do both and open a scoring window? — LeonardQuirm 4 Jun 2015
But overall, Ash is where this card will really shine in taxing decks. Although maybe I'll slip in a Hudson too for fun :) — LeonardQuirm 5 Jun 2015
Crisium and SanSan are both regions, which can't be in the same server as Oaktown Grid — shwub 5 Jun 2015
Indeed, hence why I said exactly that in my first paragraph :) — LeonardQuirm 5 Jun 2015
This card also boosts some cards that never saw play due to low trash cost, e.g. Haas Arcology AI and Alix T4LB07. — Capstone 6 Oct 2015
I think this card combos for great things. Why include it over Encryption Protocol when you can use both? Product Recall also really likes this, turning the Adonis you're already using into a +6 credit burst econ. — PureFlight 13 Mar 2016
This and Ash can keep your Lakshmi Smartfabrics alive long enough to get some counters. — GrantZilla1979 15 Mar 2016