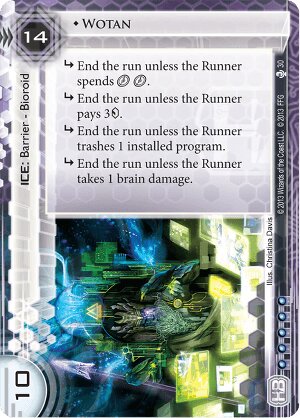 subroutine End the run unless the Runner spends clickclick.

subroutine End the run unless the Runner pays 3credit.

subroutine End the run unless the Runner trashes 1 installed program.

subroutine End the run unless the Runner takes 1 brain damage.

If there was ever a piece of ice that explained what to use Eliza's Toybox for, it was this. It big, it's scary, and the runner is not going though this with a plan and serious dedication. Because the surprise of running into Wotan is never going to do damage, it's the perfect Ice to rez outside of a run. Add in a Heinlen Grid and the runner must break this ice with a breaker without some very specific setups (such as having 3 credit on cashe to take off after losing all their credits).

It's a piece of ice you need to build you deck to support, but it's something that will stop the runner hard for a while and can open up a scoring window when they were expecting something a bit less absurd.

For added benefit, put an advanceable trap behind this to really crush the runner spirit after they've spent so much to get in.

Wotan, of the famous Project Wotan and subsequent playmat is named from the old Norse God Odin (Woden, Wotan, etc). I sometimes like to think about this card being named from the German tank operation in WW2 called Operation Wotan but alas, in Russia, Moscow captures you. Much like the ill-fated Battle of Moscow, Wotan is a sort of shiny massive barrier in the corpus of Bioroid Ice. Blue Sun: Powering the Future Decks might enjoy him with Oversight AI or Bioroid Efficiency Research but in the end, a 10 strength Barrier without many punishing effects doesn't really do much but offer a "wtf" moment when you rez him. Sadly, I love Wotan and as I have deemed him, "LORD OF THE ICE" I am a "wtf" moment lover.

(The Underway era)
Putty 157
Well, first of all, it's a barrier, and so it does a fair bit more than most barriers at not simply being "end the run". It's a bioroid, but without the ability to click to get through, and while it is technically passable without a breaker, that *is* punishing. It occupies the same place as curtain wall but with one more sub and no positional clause, although it is unique. I think it's an excellent wall, while I agree that it works best with ways to rez for free or at least cheaply. — Clutchpedal 15 Jul 2015
I love the artwork for this card, and I really want to like this ICE, but I really can't. — bubbathegoat 8 Aug 2015
Other than Bioroid Efficiency Research + Accelerated Beta Test HB decks, he won't see much play simply because he's 5 influence. Curtain Wall is 2 influence, and achieves nearly the same effect, with no option to click + credit + trash + damage to get through w/o a breaker. Janus would also be an easier splash for the surprise brain damage and ward against running, particularly in a kill deck. — EnderA 23 Nov 2015