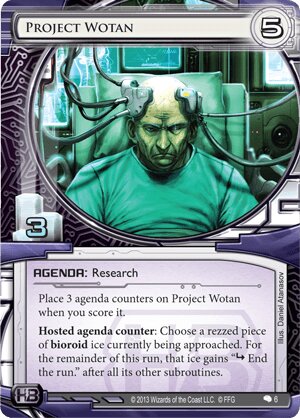 Place 3 agenda counters on Project Wotan when you score it.

Hosted agenda counter: Choose a rezzed piece of bioroid ice currently being approached. For the remainder of this run, that ice gains "subroutine End the run." after all its other subroutines.

Illustrated by Daniel Atanasov
Decklists with this card

Powerful tool in the right hands.

Most common mistake is to consider it's ability as merely rising cost of ICE breaking by 1 per counter. It's an enormous waste and if you are the one playing so, consider some other 3-pointers. This card is a taxer, stopper and a killer, if the opportunity arises. You should basically read it's ablity as: "Hosted agenda counter: Runner loses one ." At least.

Consider Eli 1.0 - the guy's biggest wekness is being a 1.0 Bioroid, which means he can be passed through with two clicks. Breaking it for cash is expensive and eventually Runner will try click through... But now you can add a third ETR subroutine. That means that either the Runner must spend an another - providing he has one. If not, he MUST use the breaker - providing her can afford it... This way you can force Runner to spend, or stop him dead if he is out of clicks. Three times in a row.

With upgraded Bioroids things are even more interesting - Ichi 2.0 has more stiff clicking cost, requiring spending in pairs. Now, when facing him, Runner must consider either to use an expensive breaker or face TWO effects at the cost of .

Project Wotan, as it's name suggests, works best with the Big Guys - titular Wotan supported by his agenda has effectively five hard ETRs. And when the Runner gets to face his fears, you can now think of your agenda counters in terms of brain damage!

(Order and Chaos era)
quiciuq 39
I agree with most of your post, but I'm not sold on using Project Wotan with Janus 1.0 because of the prevalence of Faerie (and the ease with which the runner can click through the subroutine). IMO, the agenda is better with either Wotan or one of the 2.0 Bioroids, as adding an ETR subroutine usually means that the runner can no longer click through; situationally, though, the agenda can also be good with 1.0 Bioroids. Also, I haven't tested this, but a Bifrost Array could be nice for recharging an early-scored Project Wotan. :) — icey 29 Mar 2015
Yes, it totally could ;) — quiciuq 29 Mar 2015
Yes, it totally could ;) And as for Janus, Faerie is brutal, as well as Deus Ex... Though, it is A) magnet for them, so Runner can get a nasty surprise elsewhere, B) their number is limited. Remember, that it is your call there - in "do or die" runs it's stopping power is immense, regardless of a Bioroid used, otherwise it is up to you if stopping the Runner after four unexpected BD is a valid option ;) — quiciuq 29 Mar 2015
Clicking through Turing is no longer an option... — Crashdown 8 Jan 2016
Turing isn't a Bioroid ;) — WayneMcPain 11 Jan 2016