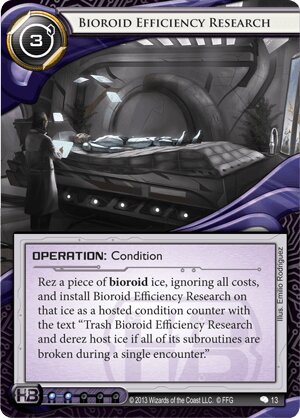 Beefy Bioroid ice like Wotan would be a very effective combo with this card, at strength of 10 and four subroutines, which unlike other Bioroids can't be broken. (Yes the first subroutine can be bypassed by loosing two clicks, but letting a fire and unloading it's payload means that the is NOT being broken). So unless the runner poinies up resources and actually uses abilities &/or ice breakers to actually break the subroutines, Wotan backed up by Bioroid Efficiency Research will likely remain rezzed and doing it's business for the rest of the game saving the corp the 14 install cost.

Blue Sun: Powering the Future can turn Bioroid Efficiency Research and expensive ice into a nifty financial boon many other combos would have difficulty matching. Imagine collecting 15 from 1 Janus 1.0 card installing it three times for a whopping 45 in a single game!

Can open up flat-line kill opportunities

Ice is only rezzed on corps turn, no element of surprise

Without element of surprise, runner may actually be encouraged to run where before there was hesitancy

Ice is vulnerable to being trashed

Limited only to Bioroid ice

Yeah, it's useful. But it's limited probably to HB or perhaps a Blue Sun: Powering the Future Weyland deck.

(Data and Destiny era)
chris_walker 685
I used it in my "Stronger together" HB since you don't have the economy boost of EtF this is a way to pay a Wotan or a Janus for 3 creds. The minus part: you're telling "here there is a Heimdall 2.0" so unless you can bluff well it's giving information you may not want to give to the runner — valerian32 3 Nov 2015
Outside of Wotan I think its best use isn't protecting a something so much as taxing the runner without taxing yourself and thereby opening a scoring window. In that situation it doesn't matter if the runner knows what your ice is so long as it costs them $$$ to get through. (In fact it may even be better if they know what it is and can get through it.) — MasterPrudent 7 Nov 2015
0

One card that is important to compare this card to is Hedge Fund. Say that you have 5 credits and a Hedge Fund, playing that card will allow you to rez an ice that costs 9 instead of the previous 5. If you instead have a Bioroid Efficiency Research instead, you can spend 2 less credits to rez and ice costing whatever you want. This means that the card is only better then Hedge Fund if you rez a piece of ICE costing at least 8, and that is not even counting the downside of the ice possibly getting de-rezed and the lack of flexibility.

With only 3 really good targets in the entire game, this card is very niche, but might have some place. There are some other support for running these super expensive bioroids, in the form of Sensor Net Activation and Accelerated Beta Test. Scoring either of those makes having several copies of super expensive bioroid ice in the deck a lot better. There is also Howler and Awakening Center, but they don't seem great. Eliza's Toybox is also in faction and have a similar effect.

Lastly Enforcer 1.0 is another card that is difficult to rez, and might give some extra value of Bioroid Efficiency Research, however it's quite difficult to justify rezzing otherwise, making it a dead card in quite a lot of situations.

So this card might make it into a deck some day, and might be worth revisiting when Janus 2.0, Heimdal 3.0, Ichi 3.0 and/or Enforcer 2.0 comes out, or any other super expensive ice comes out.

(Terminal Directive Cards era)
helanhalvan 44
Because you rez on your own turn the runner knows what he or she is up against in advance. That makes this more of a tool to scare the runner away from running a server for a little while rather than for actually landing damage. I'd go with one of the other options for rezzing heavy bioroids for that reason. — Silv 9 May 2017
That's true, but the face check of both Fairchild and Wotan are very unexiting anyway. It's more of a deterent, but in a meta with ICE derezing and destruction it's not as bad as it have been — helanhalvan 9 May 2017