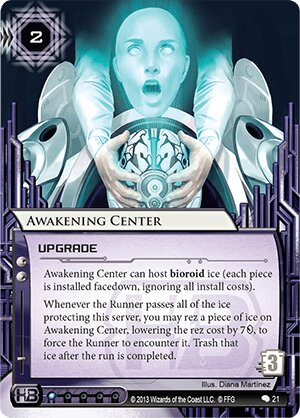 Whenever the Runner passes all of the ice protecting this server, you may rez a piece of ice on Awakening Center, lowering the rez cost by 7credit, to force the Runner to encounter it. Trash that ice after the run is completed.

Illustrated by Diana Martinez
Decklists with this card

Did you mistakenly put a big piece of Bioroid like Wotan or Janus 1.0 into your deck and now you don't have the to rez it? Perhaps Awakening Center could turn your mistake into a neat little one-off and give the runner a bit of a sweat.

(Data and Destiny era)
chris_walker 685
I personally tried it and I still find it hard to use it. — valerian32 3 Nov 2015
People usually think it's an Ash upgrade (come back next clic) and I like the idea of hiding anything else. From a Ichi to a Heimdall (or, if you have 9 creds a surprise Janus) but it's one use. I also don't get if I have to spend or if I can host it while the runner is coming to the server — valerian32 3 Nov 2015
@valerian32 : corp player can only host a bioroid on Awakening Center by installing it during its turn, spending a click. And Awakening Center has to be rezzed first. — Lupus Yonderboi 3 Nov 2015
Could we combo it with Breaker Bay Grid, for a total discount of 12 credits? — M1ke 3 Nov 2015
Well, *obviously* this is what you do with this card: — enk 3 Nov 2015
...find out the site doesn't support multiline comments; write a review instead — enk 3 Nov 2015
10

The 100% guaranteed most obvious way to use this card:

Let me know if you manage to build a deck that does this. Do it for science.

On it's own to just rez fling Bioroids at runners I do not believe that it is that good. However when you consider that there are Director Haas' Pet Project, Archived Memories, Reclamation Order and Team Sponsorship all within faction I believe that this can do some work. I can forsee this to give you an early boost to help get you through the early game and open you up for a solid late game (who wants to face several Ichi 2.0 late game?).

Unless there is a ruling otherwise, it would seem that this card can combo with TL;DR. So you can drop Awakening Center in a server behind a single TL;DR, host any scary Bioroid ice, say an Ichi 2.0 or Enforcer 1.0, install an agenda (or Snare!), and then say come get me. It's a little click intensive but for just a handful of credits you've potentially got a pretty scary server.

(Data and Destiny era)
WayneMcPain 417
Enforcer still forces you to forfeit an agenda if used this way. Pretty much any other bioroid is a better choice. — FarCryFromHuman 3 Nov 2015
Oh man, that's brillant. — TheBytemaster 3 Nov 2015
@FarCry Domestic Sleepers? But yeah, Enforcer would be a weird choice. If the runner runs last click though... — WayneMcPain 4 Nov 2015
2

Thanks to the 23 Seconds incident, Awakening Center got a bit more support. The Flashpoint Cycle released cards that encourage you to at least try some crazy things with Creation and Control cards like this one.

Hell, you could stack Centers. They would trigger simultaneously, so you decide the order of encounter. Vikram-Ichi double-punch!

Yeah, it's still a bit janky, but it will definitely catch people off-guard.

Late to the party and happy to say that I love me some Netrunner. I tend to stick to the janky combos needing several moving parts, so with that said, here we go!

I have found Awakening Center to be a great deterrent early/mid game. They see that I have a card on it and know it is most likely something nasty, so while I have 6-9 money and until they have something out that can deal with the mystery threat, they tend to not run the server. Combine having an Enhanced Protocol out, it can usually force bad decision on the Runner, especially in a remote server with an advanced card in it. I also include Mushin No Shin, Cerebral Overwriter and Junebug in my deck, to help increase the chances for the pressure to backfire. This is a janky combo that has a few moving parts and not being a competitive player, something I am known to run, but lining it up and watching the Runner realize they must face the beast is so fun. I also run Shell Corporation just in case they don’t take the bait of the trap, raise up the money to 9+ and see what will happen.

Also, how do you link cards in your review?