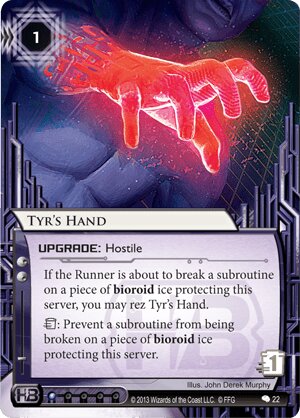 interrupt → When a subroutine would be broken on a piece of bioroid ice protecting this server, you may rez this upgrade.

interrupt → trash: Prevent 1 subroutine from being broken on a piece of bioroid ice protecting this server.

Illustrated by John Derek Murphy
Decklists with this card

Tyr's Hand is the classic case of a Card, that looks really powerful on first sight.
You break that ETR? No, I think not! Steal averted, Agenda safe.
I was very surprised not to see it played more often, so I started looking for the reason and found it in the FAQ:

The Subroutine, prevented to be broken, can be broken again in the same Run!

So unless the Runner didn't calculate very thightly (what would be stupid anyway with an unrezzed Upgrade in the Server) he can simply spent that additional or and the Run continues. The only Ice, that could be useful here is Heimdall 2.0, where the spendable Clicks are limited.

If they added the 3 little Words "for this encounter" at the End of the Text, this Card would really be powerful.
But they didn't...

But the Card gets an Extrapoint for Style. Check the Grafik on Fenris and read this this.

This card can bring out the artist in any Corp player, sometimes you just really want a certain Bioroid subroutine to fire. This just about guarantees that a runner is going to actually suffer the worst subroutine protecting the server. You can always end a run that the runner with any ice that allows you to, but where's the fun in that?

Scores of Bioroid ice feature End The Run, Trash a Program, Do X net damage , Do 1 Brain Damage etc, with Tyr's Hand even the cheapest Bioroid ice will be guaranteed to unload one of it's payloads for only the cost of 1 and one . It can literally combo with almost every piece of Bioroid ice, (some better than others - see below.)

Style points for combo-ing with the Trash one console" on Enforcer 1.0. Hey runner, say good bye to The Toolbox!

Basically any Bioroid featuring traces, psi games (if this ever happens) or any other kinds activities that are conditional with in the text itself, may not be your best candidate for this card.

(Data and Destiny era)
chris_walker 685
Tyr's hand only works to prevent bioroid subroutines from being broken. I agree about Enforcer 1.0, though! Its a cornucopia of nastiness. — sayonara 4 Nov 2015
That and it only prevents once. If the Runner has credits, tokens or clicks left they can still break the subroutine during that encounter. This card is best with 2.0 Ice, where the Runner MUST use non-click methods to avoid a Tyr'd sub. — LynxMegaCorp 4 Nov 2015
Yeah, thanks sayonara, missed that little word when reading through it first, makes a difference!. My review has been updated accordingly. — chris_walker 4 Nov 2015
Lynx Kuroneko, are you sure it works that way. I take "Prevent a subroutine from being broken on this server" to mean that for this encounter, this subroutine cannot be broken. — chris_walker 4 Nov 2015
Unfortunately, Tyr's Hand is only for Bioroid ICE. This limits it to the following: — Obelisk 4 Nov 2015
Eli 1.0, Enforcer 1.0, Heimdall 1.0 and 2.0, Hudson 1.0, Ichi 1.0 and 2.0, Janus 1.0, Markus 1.0, Sherlock 1.0, Viktor 1.0 and 2.0, Wotan, and Zed 1.0. As previously stated, this is best with 2.0 Bioroids, although I have had some good interactions with Zed 1.0 and Brain Damage through himself or forcing the runner to use clicks to break the ICE before him. — Obelisk 4 Nov 2015
Acording to page 15 of the FAQ on fantasy flights web site tyr's hand only prevents the break once but the runner is still encountering the ice and can attempt to break the subroutine again if able to do so. This means that if they have enough money, they can pay again. Likewise if they have enough clicks and the ice is clickable they may break it again by spending the clicks. Corporate Troubleshooter is a much effective way of sticking subs to a runner (provided they cant just click through). — Pilltechre 4 Nov 2015
I've certainly come across discussions about Tyr's hand prevent effect only firing once, meaning a second attempt (paying whatever costs) will still break the sub. This is best used to prevent the runner from using click(s) to break bioroids, as others have noted it works best with 2.0 bioroids. It sounds a little lame, but remember that many runners are unafraid of face-checking bioroids with a few clicks to spend, this cards takes some of that edge off. — bubbathegoat 4 Nov 2015
Lately with some Fairchild builds people have been playing, I have been coming across PLENTY of times, especially with Black Orchestra OUT, where I just triple click to get thru, for that one shot. So I mean if you wanted to, you could A: Have a piece of ICE installed instead? or B: Hurt someone... — rezwits 17 Mar 2017