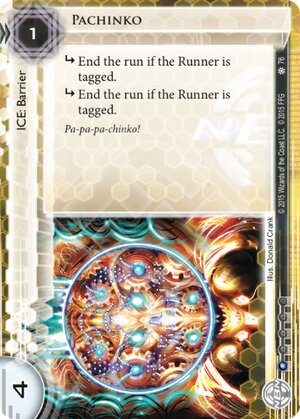 Pa-pa-pa-chinko!
Illustrated by Donald Crank
Decklists with this card

If the runner is tagged, this ICE has one of the best rez-to-break ratios in the game. For the price of an Ice Wall, you get an Eli 1.0 without the bioroid weakness. That's obscene. If the runner has to pay to break it even once, you've gotten your money's worth from Pachinko.

But they have to be tagged. And runners are very smart about clearing off tags when they matter. They have to be, with Scorched Earth forever in the meta. Generally, if the runner isn't clearing tags between turns, they are either stupid or desperate; either way, you've probably already won, and Pachinko probably isn't really contributing much.

However, Pachinko has a saving grace that makes it slightly easier to turn on than Scorched Earth; the runner just has to have a tag when they hit it. Even if they diligently clear all tags before passing the turn, if they take a tag during the run and before hitting Pachinko, they are paying to break it.

At the time of writing this, there are three pieces of ICE which basically guarantee this will happen. The old standby, of course, is Data Raven. Barring "bypass" tricks with Femme Fatale or Inside Job, they will be taking a tag if they want to see the inside of that server, and if there's a Pachinko after the Raven, they're dropping a significant amount of credits there.

Bandwidth is another strong choice. Its effect is a subroutine, not a "when encountered" effect, so it can be broken. But the runner then has to choose between breaking a 5-strength code gate, or a 4-strength/2-sub barrier. Not bad for a combined rez cost of 1.

Lastly, there is Gutenberg. Off R&D, it's not particularly useful, since a Mimic will get through it (and therefore through Pachinko) for 1. But on R&D? Ouch. Trying to pay to break a 6-strength sentry is a nightmare, as is paying through trace-7; but if they don't, then they have a big ugly barrier to break through, and a tag to clear afterwards. This is a pretty efficient way to discourage R&D lock, and only costs 3 to rez together.

With any of these pieces of ice, you have to have Pachinko played first. That's kind of awkward; if you've draw it late game, when you've already iced up your servers, putting Pachinko down on the outside isn't going to do anything. But if you draw Pachinko early, it will do little to nothing until you find your supporting ice. If you're trying to make the Bandwidth/Pachinko combo work, then you've got two different pieces of ice which do nothing on their own, which is unreliable and frustrating to work with.

Data & Destiny is on the horizon, though. It's a pretty safe bet that we'll see some neat ways to help tag the runner and keep them tagged. More tagged runners makes Pachinko very happy. Until then, though, I would probably just stick with Ice Walls.

(The Underway era)
tiedyedvortex 4702
It's worth thinking about the hidden costs of Bandwidth over Pachinko. Every card has an inherent cost of two clicks - one to draw and one to play. Then there's the credit to install. Those costs bring the price of the combo up to a level comparable with vanilla barriers like Eli, Bastion and Spiderweb. — Greasythumb 9 Jul 2015
5

I really liked this card because if it worked out, it could be a real tax to the runner. I included it as a "one of" in a few decks and often was happy with the results. Of course, sometimes it was annoying if I drew it first without a Data Raven as support. But with the release of Thoth, this became even easier to use. However, the release of another card has rendered this card basically obsolete in my opinion. I speak of course of IP Block. (Aaron Marrón too can be a real bummer.)

With IP Block's second subroutine, it can fulfill basically the same role as Pachinko. It does cost one more to rez but has two significant factors in its favor that more than make up for this price increase. If the runner has an installed AI, boom, they take a tag, thereby activating the second subroutine (Hunting Grounds can disable this feature, but it is still a strong point in its favor). The second factor is its first subroutine which has the ability to give a tag as well.

Now a runner without an AI installed will be able to break just the first subroutine or beat the trace. But that is usually going to cost at least a couple credits. Certainly better than a Pachinko without support. And if used in conjunction with Data Raven, Thoth, or Gutenberg it becomes better.

So Pachinko was rarely used before but now it'll probably be totally forgotten. Though I suppose you could try to use it with Chief Slee.

Pachinko is a bit of a conundrum for me. On the surface it looks amazing—a 4 strength barrier for 1 that punishes tag float? Sign me up! But then I looked more closely, and started play testing, and I've finally come to the conclusion that I don't think it's very good and I won't be playing it. Allow me to explain.

Without tags, this does absolutely nothing. Runners can walk over it and into anything if they feel so inclined, and even though you could rez it, it would do nothing but give the runner free information that they don't need to have. Ah, "But it combos with Bandwidth," you say? Yes, this is true, but then you need both this and Bandwidth to be effective, and that's an extra and spent setting all of that up.

"What about putting it behind Data Raven?" you protest. Data Raven by itself is usually enough to keep a runner out, almost certainly if they're running on their last , and needs no help from Pachinko. And if they do walk through Data Raven, they're probably going to spend a and 2 (or often 3 if you're playing SYNC) to clear the tag, which is usually sufficiently punishing in its own right.

And then there are those times you want the runner to get through if they're tagged. Got a Quantum Predictive Model on the board? This will make sure they probably don't help you score it! Got a few unrezzed Dedicated Response Team ready to flatline the runner? Oops, you've rezzed this earlier, and now it's just hurting your chances. Now, if the subroutines were instead End the run unless the runner is tagged I think this could be a very interesting card.

But as it is, I can't recommend it over Wraparound. Wraparound costs only 1 more and spews hate all over Faustian Anarchs without Corroder in play. It doesn't require the runner to be tagged (so no need to combo with another piece of ice), it merely requires that they don't have a fracter out yet, which usually has a fair chance of happening on those first few turns. So to parody the flavor text, I think this is going to be Un-un-un-used!

(Data and Destiny era)
Pikeman 279
In the end, this is mildly a positional ice, and just like the reviews of Chum and Inazuma and the rest, positional ice isn't reliable because you need two cards. I think your point about Data Raven is somewhat valid, although if I want to keep the runner broke, 2 credits and a click isn't really enough. But I simply cannot rely that the scoring server in my NBN glacier will quickly and easily set up with Chum over Data Raven over Pachinko over NAPD, so including Chum and Pachinko tends to be riskier than Wraparound and Pop-up, even if the server is a lot less expenvice for the runner in the end because you can do them in any order and over different servers. — Goldstep 31 Oct 2015
I can see one area where it seems like a good solution, and better than Wraparound. It seems perfect for icing HQ if you are worried about getting "siphon train"-ed to death. It seems like it ought to slow down a hyper-aggressive siphon-wielding runner (probably going to be four credits to break vs. one credit for wraparound), and has a rez cost that is perfect for starting to rebuild when you are at rock bottom. Outside of that I think it is true that it is of marginal use, but if you have an NBN deck where your biggest worry is getting "siphon locked" it might be a decent piece of ICE for HQ. — Popeye09 31 Oct 2015
Popeye - Quite true, I didn't think of that. But usually when I get account siphoned, it's followed closely by a lawyer up or simply paying to remove the tags. Sure there are the oddball decks that love to float tags regardless of what they're playing against, but any deck with this in it should have its own ways to punish tag float other than just a piece of ice that becomes ETR. — Pikeman 1 Nov 2015
Speaking of Chum, Pachinko's subroutines still fire if ignored due to the Runner lacking a tag. So even just slapping it behind a Chum can be irritating, albeit inefficient. — LordRandomness 8 Jun 2016