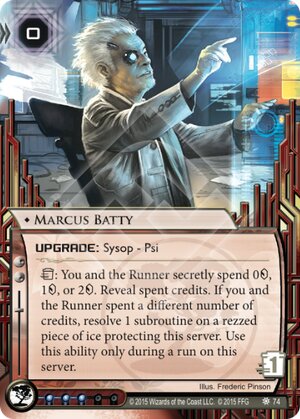 Illustrated by Frederic Pinson
Decklists with this card

The Flare that burns twice as bright burns half as long - and you have burned so very, very brightly, Marcus.

The 1980s weren't nearly as good as everyone thinks, although they were certainly better than the '90s. Nothing went right in the '90s outside of the birth of CCGs and the golden age of Sportcenter. Like everyone else I ushered in the new millennium a year early just to be grateful to flush away a grungy, ten year old flannel-wrapped, turd.

If you're not old and grumpy like I am, you may not be aware of just how massive of an Easter egg Marcus Batty is. You probably won't care - which is fine because everyone gets sick of old people telling them in one breath how easy they have it at the same time as saying how much better things used to be.

Not only is he the sort of card that makes you immediately do a t:ICE search just to see how much evil you can pull off (66% of the time, it works every time!) but he happens to share the surname with Roy "I want more life, fucker" Batty from Blade Runner WHILE being a direct call back to Dr Dreff, a sysop upgrade in the original Netrunner CCG. Dreff himself was a call back to Dr Emmett Brown of the Back to the Future franchise (still leeching money from Gen X pockets today!), who was in turn a call back to Albert Einstein. That's three layers of call back regression in one great, great card. Lastly if I'm not mistaken our good man Batty bears more than a passing resemblance to John "Cyrus the Virus" Malkovich. I may be reaching with that though.

The best and funnest card in a little while for me. Until Turbeau Delacroix v2 comes out with Data and Destiny at least. I know you're in there!

(The Underway era)
Fassbinder 56
The best review I've read in ages. Delightful. — Shockeh 10 Jul 2015
This card is too strong... — UminWolf 21 Jul 2015
Isn't Turbeau Delacroix v2 basically Bernice Mai? I mean, sure it's not trace 10, but trace 5 is very respectable. — Treiclon 26 Sep 2015
How would this work with the Kitsune? Would it basically allow me to use Kitsune potentially 6 times instead of only max of 3 (3 copies of each assuming no recursion)? — Orgodemir2 30 Dec 2015
For the benefit of anyone fortunate enough to have avoided the 1980s, I would like to state that the 1990s were objectively better than the 1980s in every possible way. This does not apply if somehow, you enjoy listening to Kajagoogoo while wearing head-to-toe stonewashed denim and praying that you don't die in a nuclear holocaust. *insert something about Netrunner here* — raygillgumm 4 Jan 2016
5

A weirder, one-shot Caprice Nisei. Batty's power level is equal to whatever ICE you rez over him. Here's a wishlist of the game's most brutal subroutines:

Those are what come to mind but the potential with Batty is pretty crazy. Depending on your deck's needs, there's probably a killer subroutine that makes winning easy (think Data Raven or Gutenberg in Butchershop, Taurus in any Scorched Earth build) & Batty gives you an ≈67% chance of landing it no matter the opponent's icebreakers.

Dreams of brutal subroutines aside, Batty is also a solid Ash 2X3ZB9CY replacement in glacier decks. I'd expect Replicating Perfection players to save 2-4 influence by resorting to Batty.

There are some interesting timing issues with Batty too that I haven't had a chance to fully experience in my few games with him. You can fire his ability during any window, unlike Caprice, so the only holdup is ensuring you get your target ICE rezzed first. In glacier builds where Batty is used for an ETR, he'll function much like Caprice & be triggered after the last ICE is passed. But I can imagine scenarios wherein a runner anticipates a Batty kill & jacks out before you have a chance to fire. There are also probably many edge case scenarios where you'll want to trigger him because of ICE placements, e.g. to trigger a Gutenberg in front of Universal Connectivity Fee, a Chum in front of Neural Katana, etc.

Is Batty broken? Are we all sick of Psi Games? IMO, Batty is actually more balanced than Caprice Nisei. The one-shot nature combined with the ICE rezzed limitation makes it much harder to get value out of him. That said, his upside is enormous & will only continue to climb as more fearsome ICE is released. With a rez cost of 0, you can even circumvent Drive By or anticipate Hacktivist Meeting simply by installing him rezzed.

(The Underway era)
phette23 2261
I think, the best choise for Markus is "cannot break" subroutine of Inazuma. — alex_monk 8 Jul 2015
Here's an idea to blow your meat mind. How about using Marcus on... Cell Portal!? — LynxMegaCorp 9 Jul 2015
You would have to have unrezzed Cell Portal (ie. with broken sub), then fire the sub only to derez it. Not some huge value... — quiciuq 9 Jul 2015
In RP, batty is just hilarious. Resolving a Susanoo after someone painstakingly broke it with Faust/Datasucker Mimic is a whole new level of satisfaction. — Kasusfactus 9 Jul 2015
Nice synergy with wormhole if you ever wanna try something crazy — tsuruki23 9 Jul 2015
Thanks for ruining the joke, quiciuq. I hope I never play against you. — LynxMegaCorp 9 Jul 2015
Wormhole is an awesome idea with this. Lets Batty reach everything. Why didn't I think of that? — LynxMegaCorp 9 Jul 2015
Dont forget utility ice and program trash. Combo babatbatty — tsuruki23 14 Jul 2015
I saw someone use this with grail ice. The runner ran at HQ. The corp rezzed Lancelot and Marcus. Using Marcus right away, they trashed the runners killer. Then, as it was the first piece of ice, the 3 subroutines triggers trashing another program, doing 2 net and EtR. Super cheap combo that can't be stopped unless the runner has 2 killers installed; or guesses right of course. — quailman2101 15 Jul 2015
Don't forget that you can Chum your Chum with Batty. Using Batty during the approach means that the next ICE he encounters is Chum itself, and he can't jack out! — Treiclon 26 Sep 2015
Or, if you have a chum that fires and the runner decides to push through, Batty can double the chum's effect on the next ice for +4 strength and 6 net damage. — Feasul 13 Oct 2015
I'm particularly fond of using Batty on Inazuma's "cannot break" sub during the approach window when you would have the chance to rez that Inazuma. This means the runner can't break either of Inazuma's subs, and thus suffers both, so they're forced to walk into the deathtrap ice after it (Brainstorm if you want to meme harder, but there are plenty of ways to almost guarantee a win after that). — CelestialSpark 6 Mar 2018
4

This card is way too strong. I really feel this card broke Netrunner. Him paired with Archer will end the game 66% of the time if both players have credits. Even if you play the best Netrunner game of your life; if the corp has 2 credits and a scored agenda, if you guess wrong, they blow up your sentry breaker, you then run into Archer and lose your other two breakers.

Even with NEXT Gold, if you guess wrong, you could just lose...

I'm fine with a card doing something like Marcus Batty, but not on a guess....

Any thoughts on this please post them in the comments.