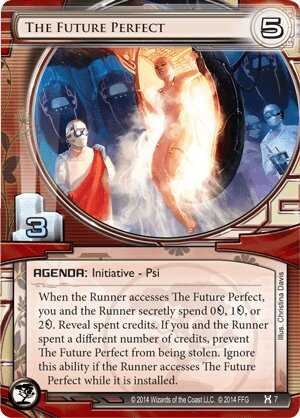 The Future Perfect, aside from being a tense, is an agenda dedicated to making the runner run remotes. It's a serious answer to Jinteki's problem of porous central servers.

Jinteki has always had a strong remote game. From Project Junebug in the core set, to Fetal AI in the first cycle, to Psychic Field in Honor and Profit; Jinteki has always had strong ways to punish runners who check face-down remotes. Unfortunately, cards like this have made R&D and HQ "porous", in that a runner could run in, trash an ambush for petty cash, and then run back in, sure of seeing at least one new card.

This weakness has crippled early Jinteki builds, which had to use threats like Ronin or Snare! to keep the runner from ignoring advanced remotes, or accessing too many cards at once, respectively. But these often required a persistent flat line threat, like Neural EMP, Scorched Earth, or other damage effects to allow Jinteki to capitalize on the advantage. A deck focused on non-flatline wins often found itself crippled by this weakness.

Then, The Future Perfect arrived. Instead of being instantly stolen, like other agendas, or requiring a set amount to steal, like Fetal AI, or NAPD Contract, this required the runner to play a guessing game. The mathematics of this game have been floating around for a long time, as well as debates on whether to randomize or not randomize, so I won't go into that here. Here is a detailed analysis. The real point is that this triggers only on access from centrals.

A savvy runner will try to exploit Jinteki's weaknesses by accessing lots of cards from centrals. The Future Perfect makes many of these accesses unproductive; if you consider the oft-quoted median number of random accesses to win (17), this makes some of the accesses not even count--throwing the math way, way off. A runner could try to re-access the agenda from a central, and play the psi game again, but this has about the same effect of going back to a slot machine because you removed all the losses from it. With that in mind, let's consider some counterplay.

Agendas take paths throughout the game: from R&D, to HQ, to either a remote or Archives. (From there, the possibilities fan out.) Due to how the game is played, the corporation can't meaningfully alter this part of the path. It can slow it down, by keeping cards in HQ and not drawing; speed it up, by drawing and installing aggressively; or try to reset the cycle using Jackson Howard. The Future Perfect allows Jinteki to hold an agenda in hand for a much longer time, allowing them to build up a solid plan to score from a remote. (Or, in rare cases, fast-advance.) It doesn't, in itself , bring Jinteki closer to winning--much like a Scorched Earth when the runner has lots of and no tags.

With that in mind, a good thing for runners to do might be to analyze the board, and dismantle whatever would allow Jinteki to score. If it's ice, building up credits and installing breakers is a reasonable counter-play. If it's upgrades like Caprice Nisei or Ash 2X3ZB9CY, accessing them and trashing them becomes a priority. If the runner can stall out the corporation's plan, more agendas will build up in HQ, ripe for sniping. There are also at least 12 more points of agendas, which the runner might try to access. Finding these tends to be a burden. Some "deep dig" builds might manage it, but it's a serious investment that puts a lot of eggs in one basket. A third option is to use the card to drain money from the corp, by betting 0 over and over again. If the runner can access for free, it's a solid plan, but clicking to make the corporation lose 1 is only worthwhile if the corporation is near 0 .

Glacier-style Jinteki decks are extremely happy with this card. It allows them to build defenses gradually, without placing all their resources in centrals. The most obvious comparison to this card is NAPD Contract, an agenda famous for "protecting itself," but I think a more apt comparison is Caprice Nisei. A single lost psi game, and the cards are gone, giving a major advantage to the runner; but the cards protect themselves 2/3 of the time (roughly). In the same way, both are best played with lots of taxing ice, so that runners can't use the cards as if they say: : the corp loses 1 . As Jinteki gets more ice, and more interesting ice, The Future Perfect will see more varied use.