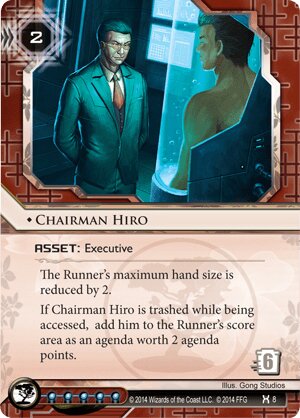 The Runner gets -2 maximum hand size.

When this asset is trashed from anywhere while being accessed, add it to the Runner's score area as an agenda worth 2 agenda points.

Chairman Hiro seems weak in comparison to the other five influence executives. "It belongs in a brain damage deck," they said, "and that means HB, and this costs 5 influence." And while I tend to agree, do not despair—I'm convinced Jinteki can use it, in extremely specific cases where it can actually win the game. The key is to use it where it can flatline the runner, which means combining it with Valley Grid, ideally in a white tree deck with Ancestral Imager, Whirlpool, or Labyrinthine Servers.

Now let's address the problems with this. It takes a massive amount of setup to pull off such an insane combo. Things like Architect, Minelayer, and even Dedicated Technician Team can help you get a lot of ice on a single server. Cards like Akitaro Watanabe, Amazon Industrial Zone, and Executive Boot Camp can help you get it rezzed as well. But is it worth it to go through all this effort just to pull off some crazy combo with CH?

Yes, but the answer is far more complicated than can be summed up in a single word. The fact is, anyone playing white tree knows that most runners avoid remotes unless they have exactly one, or sometimes two, advancement tokens on it. Greater tokens than that, and they usually risk being flatlined by Project Junebug. No tokens at all is usually an indication of an extremely annoying Snare! or similar. HQ is frequently loaded with the same, as is often the case with archives. So, R&D invariably gets hit hard, and that is where I see, on occasion, six or more pieces of ice protecting that single central server.

Enter Gordian Blade. Stacking that ice looks like little more than a joke—and the joke is on the corp. This is where Valley Grid is invaluable, but only if you pick your ice with extreme care. Done right though, this can completely lock out a runner without Public Sympathy or its kin, or a method of trashing ice, from getting in. This requires a LOT of ice that must have all subs broken though, and most runners aren't scared of going down to a max hand size of 0 for the end of a single turn, if it means they can get multi-access with a Medium or R&D Interface.

It's in these cases where CH is the icing on the cake. It augments something you're doing anyway in RP—making a big ol' stack of ice on R&D, only now you need less pieces to get the runner within range of obliteration. But that's not even the best part, as it doesn't even have to be in your deck to do its job! Okay, I'll be honest, this will never shift the meta as hugely as JH, Clot, or Film Critic. But it's still out there, and runners should be aware of it. Corps can even put tokens on it with Mushin No Shin to mask its presence. And if they rez it at the right time, it's going to be game over for whatever unfortunate runner happens to be on the other side of the table. If this wall of text hasn't convinced you, maybe my wall of ice (and I don't mean Ice Wall) will...

(The Universe of Tomorrow era)
Pikeman 279
The Chairman may be hard to splash in HB, but Gyri Labyrinth is an easy splash in Jinteki. ;) Combine that with the synergy of Genetics Pavilion and put it in a Thousand Cuts Blacktree deck and he can be really potent. I've won a couple games from negative handsize with Chairman. Fun card. — WayneMcPain 5 Oct 2015
Why not catch a decoder-less runner with a single Gyri, a Chairman Hiro and a Marcus Batty? — PapaBear 9 Oct 2015
Valley Grid can also be used to defend Hiro himself, making running him a terrifying prospect. — LordRandomness 29 Jan 2016
Does 'is trashed' mean the act of trashing, the state of being in the archives, or both? — Runaway 4 Feb 2016
The act of trashing. If Hiro is in archives, the runner cannot trash Hiro for the agenda points. — Delrian 10 Mar 2016
Hiro reduces hand size 2. Like two fingers - finger cutting Yakuza style. Very flavorful. — DeathnTaxes 1 Jul 2016