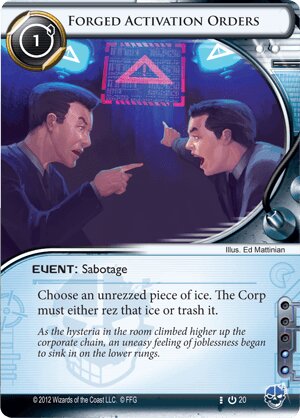 Choose 1 unrezzed piece of ice. The Corp may rez that ice. If they do not, they trash it.

As the hysteria in the room climbed higher up the corporate chain, an uneasy feeling of joblessness began to sink in on the lower rungs.
Illustrated by Ed Mattinian
Decklists with this card

Early econ pressure which forces the Corp to spend credits and reveal ICE. Unlike facechecks, FAO is a definite way for the runner to discover an ICE. This comes with the added advantage that the corp will have to pay for them immediately. Very threatening when used in combination with Special Order and Account Siphon. Also gives the runner targets for Emergency Shutdown. The classic, back-to-basics sabotage suite.

The effectiveness of this card is largely up to the Corporation and that's not great.

For a card like this to be good, you really need to be able to have really good abilities on the card OR you need to be able to eliminate one of the two options that is least bad for you. At least to some extent, this card does actually do both of those things, and therefore this card isn't completely worthless.

It's possible to cast this when either option is really good for you. It could make them rez an ice you don't care about or lose money they need. The least bad of those for the corporation could still be worthwhile for you.

I want to focus more on the latter of those possibilities, though, the ability to turn one side off.

Ideally, at some point, the corporation is going to be low on money. You can control when you use this to correspond to that time. If you also have Account Siphon or Vamp, you have even more control. Additionally, early game is a time when both players really want more info and more money.

Is it better enough to be worth deck slots? That's a tough one. Most of the time, probably not. Very possibly, though.

This is a very interesting card. Play it turn 1 or 2 to force the Corp to decide if they want to defend HQ or R&D and / or give you potential free access on the other Central especially if no Hedge Fund was played so far. On top it takes away the surprise factor and facecheck punishment, additionally in the early game crims can use Special Order to fetch the correct breaker to increase the pressure. On top it might enable Emergency Shutdown so corp rezzes ICE on Remote, you run HQ for free and derez it. So in this it's similar to Maxwell James and both have different purposes.

Playing against Archer this is nice, does the corp want to rez it, when you are not facechecking it? Probably no and if yes, it might prevent you from getting in, but without the corp getting 2 creds and you loosing potentially 2 breakers.

When the Corp tries to score an Agenda, like: Install, Advance, Advance, this card shines. You know they will likely use their creds to defend the remote. Usually you use this point in time to get free / cheap access to HQ and / or R&D. But with an FAO in hand you could use it put them in a lose lose position. You rez the ICE I get the agenda, you don't and you might need to find another ICE to protect this server. On top if the runner runs on a central in such a situation, the ICE might be crippling him and it might become impossible to run the remote (e.g. rezzing Tollbooth might make them lose the creds to install Paperclip & break Vanilla, but not anymore with FAO).

Also in the late game it can create such situations as it might remove 1 ICE from a central and you know the one rezzed is easy to break. But of course there it's more important to wait for the right moment to use it. Of course Los: Data Hijacker makes this even more interesting as it means he get's his ID ability creds without running so it's an auto include combined with Rubicon Switch he can get crazy.

Great card for criminals. At the minimum, it will give you an information on a ice in place, since it will be rezzed. Best if it but the corp in a bad position economically. Otherwise, you just trashed an ice, making your runs easier. Good things all around.

To enhance its effect, you can combine Forged Activation Orders with Hernando Cortez or Xanadu. It also combine well with Reina Roja: Freedom Fighter and Los: Data Hijacker identities, since it will trigger their ID.

But this will not combo with Aumakua to get virus tokens or with Zamba, since it is not a reveal effect.

While it is a fun card to use, it often does not put the corp in a bad situation, depending on the ice you force it to rez (like forcing the corp to rez Pop-up Window). At least, it will give you information, which is always valuable, but might not change the board state.

Good art, good quote. Glad to see it come back in the meta.