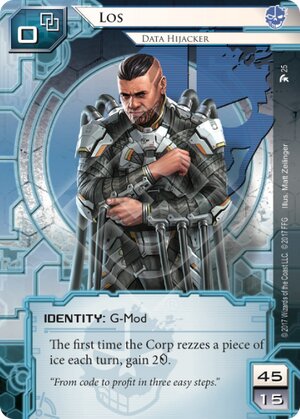 The first time the Corp rezzes a piece of ice each turn, gain 2credit.

"From code to profit in three easy steps."
Illustrated by Matt Zeilinger
Decklists with this card

Los has been a really interesting experience so far. In all the games I played with him so far, the corp paused when I ran on the first ice each turn. "Do I rez this now? It's 2cr for him" Especially so, if it was an ETR-ice. Also I find him actually more consistent than Gabe for firing at least 3 times per game, because the corp will rez ice at least on the centrals whereas Gabe can get locked out of HQ in the mid to late game.

When you choose Los you most likely will run cards that can derez such as Emergency Shutdown or Crescentus. Los is also the only contender for using Exploit which can be quite a tempo swing of you paying 2cr and the corp losing about 10-12cr. For the latter to fire you only need an additional Archives run, as you usually would like to run R&D and HQ anyways.

I also had some success including Ice Analyzer and Compromised Employee for additional value and some of the bird breakers. As of yet, with only Station One out, he really lacks a signature console, so I have tried using Reflection, as jacking out after the first ice may help you maximize his ability.

Gaining 2 per turn isn't great. Criminals are very rich thanks to Temujin being a zero influence econ option for them, on top of the Desperado and Security Testing suite.

If you play this ID and then derez support like Emergency Shutdown, Crescentus, Muertos Gang Member or the birb breakers, how is spending your ID ability and these card slots better than being Andy or Leela and spending those slots on cards that advance your game-plan better than 2 credits a turn?

Short answer is, as of Station One, it isn't. If it were an aggressive ability like Reina Roja: Freedom Fighter, or if it were draw a card, then that's different, but as it stands, its an ID that is supposed to accelerate your game-state but needs support cards that then weaken your game-state by virtue of not being other, better blue cards.

Like Gabe, but less likely to earn you a consistent income. I feel Los only has relevance against a well-executed glacier deck, whilst running Gabe only requires HQ accesses, so a lot less dependency on the way the corp plays.