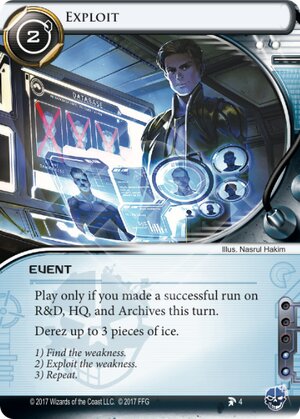 Derez up to 3 pieces of ice.

Exploit is one of five cards that require you to run all centrals so it makes sense to compare it with other cards that have the same requirement:

Encore and Quest Completed can under the right circumstances lead to extra points. Notoriety is an extra point, period.

So how does Exploit compare? Rather favorably I have to say. While Exploit doesn't wipe the board clean it doesn't hurt your own board state like Apocalypse. And while it doesn't let you access a card like Quest Completed it does let you weaken defenses so you might get in to a server that's been previously too well defended.

But the real value of Exploit is tempo. If the corp has even medium-expensive ice (4-5) derezzing three pieces either makes the corp have to spend a fair amount of credits on rerezzing or it makes them scramble to get more credits or cheaper replacement ice. In either case it takes time away from advancing the corp's agenda(s).

Like many cards how valuable Exploit is depends on your timing. If you can play it on the right server while the corp is low on credits you can generate opportunities for scoring agendas. If you play it while the corp is rich you'll probably only make the corp a bit poorer. Not the worst outcome but not very satisfying given the investment required.

And an investment it is. You need to spend an entire turn executing an exploit plan. Running three centrals in a single turn is not easy even with efficient breakers like Passport. Of course there's no reason you can't make those runs valuable in their own right, for example with Legwork and Security Testing on archives.

Given the difficulty of pulling a three central run (is there a cool term for that?) off Exploit is not a card to just throw in your deck because it looks good. Your deck and your game plan need to work to support it. And once you pull off the exploit you need to have a way to, well, exploit it before the corp can react.