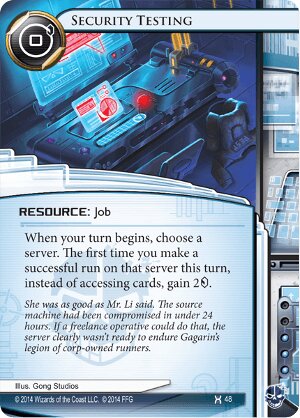 When your turn begins, you may choose a server.

The first time each turn you make a successful run on the chosen server, instead of breaching it, gain 2credit.

She was as good as Mr. Li said. The source machine had been compromised in under 24 hours. If a freelance operative could do that, the server clearly wasn't ready to endure Gagarin's legion of corp-owned runners.
Illustrated by Gong Studios
Decklists with this card

Two ways to look at this card: "MONEY! Woot!" and "Hey, Corp, waste money and clicks on Ice, ok?"

As a reusable "2 for 1 " card, you can look at this as a way for getting a little extra money per click, once per turn. It works well with other "sucessful run" cards. Particularly if you have Desperado and a John Masanori installed and use a Dirty Laundry, this card can really punish a corp who doesn't want to Ice up remotes and archives. For Archives, Datasucker also adds to it, and if you know you will be running every turn you can even throw in a Grifter got more cash... but that might be taking it a little far. Even without the dirty laundry, in the "MONEY! Woot!" theory, this is a "1 click for 4 credits, a card, and a datasucker token or two." Click compression at it's finest.

So the corp sees this and says, "I better put something over Archives, even if it's just a Pup or a Caduceus to cut that down to 2 credits, a card, and some tokens." That's one fewer ICE to protect somewhere else, 1 fewer card in HQ, and a 1-3 credits for the Rez. Against horizontal decks (except RP) that like to have 2 or 3 bare remotes, this can be a major pain. You don't want to ice up all of those assets, but gosh, if you don't this stupid runner just waltzes over me with amazing money and maybe even some card draw compressed into 1 click.

Sounds good, right? So why isn't this the Jackson Howard of runners?

Well influence. 3 influence means it is a little expensive outside of . That means it doesn't quite make sense in Shaper or Anarch. (Although the Shaper are getting a similar card, but for draws instead of credits soon.)

Also dead draws. You can't use two of these to get 4 credits in one click by themselves. So unless you are running twice on two different servers, the second one is not all that helpful.

And that brings up the set up time. Just this one card... run and don't access my stuff. Whatever... it's two credits. Until you start getting a few other cards, all you are doing is making sure my SEA Source will work when I draw it. So while you find John and Desppy and everything else, I'll just be over here scoring agendas... loser.

And lastly Glaciers! When my corp idea is to set up huge servers with 3 or 4 ice each anyway (I'm looking at you RP, Torchwood, and Foundry) then let the runner put out cards that replace their expensive trip through my server with 2 creds... ha!

(Data and Destiny era)
Goldstep 95
Security Testing also has good synergy with Jak Sinclair. Get a card, 2 creds and a sucker token for free every turn. combine that with Doppelganger...but the setup would be plain stupid. — WayneMcPain 9 Dec 2015
I don't believe you would get the free sucker token with Jak Sinclair. — GrantZilla1979 10 Dec 2015
Yes you would, as using a program and a program activating are two different things. Just look up the ruling. Same applies to cards like Medium. — LynxMegaCorp 11 Dec 2015
How does this card work with multiple copies? How come you can't use multiples on same server, in order to gain 4/Run (I know it has something to do with the way the cards are triggered, but I can't wrap my head around it). — GoldenHawk 24 Dec 2015
@GoldenHawk afaik it is because it's a replacement. You replace accessing cards with gaining 2 credits, but since for the second one you aren't accessing cards already it won't be able to replace the access. It'd be the same case with Sec Test + Siphon, for instance. — lumbendil 5 Jan 2016
This is also hilarious against trap-heavy things like Shell Game Jinteki. Since you don't access you won't trigger the trap, so you can safely farm any placed traps for credits — LordRandomness 18 May 2016
Does this synergise well with other cards? Working on a Gabe deck with desperado and Temüjin (because i am lazy)and was wondering if i could add in this and Feint for a 2bit-double-bypass for $$$, i am sure this is TGTBT but I cant see it. Also Feint and Bank Job are in the back of my mind if i can have some clarification. — DarkHorse 22 Jan 2017
Gabe's ability, Desparado and Tem Contract all state 'when a run is successful, gain X' so they will work in conjunction with security testing, as security testing just replaces the access effect. However, Bank Job will not work with sec testing as both are separate replacement effects. Feint will work with Sec Testing and Gabe/Desp/Tem Contract which is pretty nice. — Oooer 24 Feb 2017
@goldenhawk @lumbendil or anyone else...if i have 2 installed and assign both to, archives for example, can i run archives, get my creds, and then run archives again and get creds again? Jinteki pulls the "archives" tag off one but not both, and I haven't tested this yet. — ThreeGee 21 Mar 2017
Do you get to see what's in the server? (Even though you don't interact with it) — JuarezLM 19 May 2017

I don´t think so

The one true Criminal answer to asset spam, and one of the few Criminal H&P cards to withstand the test of time.

It has a (literally) free install cost of 0, potential gain of 2 for a , not to mention synergy with other run cards. These days, Criminals are also packing Temüjin Contract and Tapwrm for a "successful run" economy powerhouse.

Criminals have the least in-faction asset trashing and/or long term economy cards as compared to Anarchs and Shapers. This often means that they struggle to play the stamina game. Commonly rigged with Desperado, each SecTest is effectively ": 3" for every open server.

While SecTest can still threaten Archives in the early game, naturally, it is not as effective against glacier. That is what cards like Los, FAO, and T-Contract are meant to deal with. Having a balanced deck is important so that you actually stand a chance when playing your weaker match-ups.

Fast forward a few years, SecTest is still a core staple of (aggro) Criminal decks, as it forces the Corp to ICE every server, or risk giving the Runner a fortune.