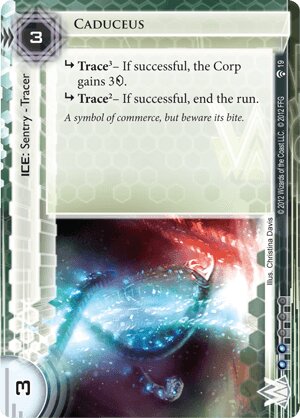 A symbol of commerce, but beware its bite.
Illustrated by Christina Davis
Decklists with this card

An excellent addition to the pool of taxing "econ" ICE that give the corp credits back (Pop-up Window, Errand Boy and Negotiator).

Because its subroutines can be broken with breakers or credits (via traces), it should be treated as a porous taxing ICE (like a Pup or Eli 1.0), not a solid run-ender. In this role it performs quite well, taxing 2-4 s if they have a killer out, and probably more if they can't break and have to pay for traces.

Let's compare it to the other "econ" ICE:

From a straight rez-cost-to-tax-ratio perspective, Pop-up Window is the clear winner. So why use Caduceus? Influence is the most obvious reason - if you're playing Wayland and don't want to splash for the Pop-ups. However there are other strong reasons to consider Caduceus. At 3 strength, it is considerably harder to brush off the board with a Parasite. Furthermore, it is giving you a stronger tax, but for a bigger upfront cost. This means if you're trying to build a "stronger" server, or just generally already have a strong econ, you will probably get more return from the investment in a Caduceus over a Pop-up Window. It's also a sentry rather than a code gate, so if you aren't already running sentries, it works as an excellent gear-check to force the runner to stop and dig out their killer.

Caduceus obviously syngergizes with things that improve or play off your ability to win traces, although this only comes into play early in the game before they have a killer out.

If you have recurring trace-buff credits, always use your first 3s to buff Caduceus's first subroutine. If that first trace succeeds, you then effectively get the trace credits back to spend on the second trace (although you could also choose to keep them as permanent credits). Resist the urge to spread your recurring credits between the traces, as that benefits the runner, since they don't have to similarly choose where to invest their (it works on every single trace).

(The Valley era)
Bigguyforyou518 1719
You forgot [Archer](/en/card/01101) and [Shadow](/en/card/01104), which are also "eco"-Ice in your definition. — PeterPan 12 Apr 2015
Doh, you're absolutely right. Those ICE don't fit quite as neatly into a stat-by-stat comparison, but they DO give you credits :D — Bigguyforyou518 13 Apr 2015
I think this is the thing people often forget about Weyland - ICE is their econ, no other faction has so many money making ICE (I think the Pop-Up is the only exception?). You won't probably use all of them in one deck, but you can choose one for the right job. Shadow is for tagging, Errand Boy for fast-advance shenanigans. Cadueceus and Negotiator are the most universal I think. — konradh 14 Apr 2015