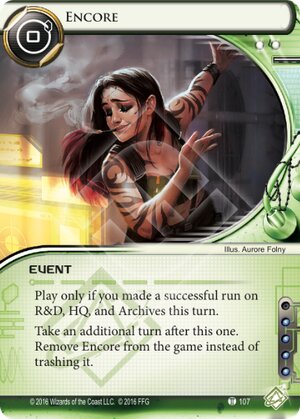 Take an additional turn after this one. Remove Encore from the game instead of trashing it.

Illustrated by Aurore Folny
Decklists with this card

At first glance, this just seems like a difficult and unreliable way to gain three . After all, it is usually quite costly to successfully run at all three central servers in one turn. It is actually a bit better than that. Still, Encore probably won't find its way into many decks.

Why is it a bit better?

Because it gives you another turn rather than just extra s, this will satisfy a number of beneficial triggers.

-Wyldside and Earthrise Hotel will give you two cards

-Also available are s. Ele "Smoke" Scovak: Cynosure of the Net, Lockpick and the like.

-Cards like Patron and Security Testing can be used again.

Ways to make it easier.

-Omar Keung: Conspiracy Theorist has an easier time, but there's probably no way he will include this card because of the four influence cost.

-And of course, old faithful, DDoS.

Nasty Corporate tactics that can ruin your Encore

-Caprice Nisei, Marcus Batty, Crisium Grid, and Nisei MK II are among the ways Corporate can stop you.

How does Encore stack up to other three-run events?

-Three (maybe more) extra s is great. You can make a lot happen with it. But...

-Quest Completed can easily get you more than one point.

I think this card will be fun to play around with. And against certain decks you may find it easy to pull off. But against many, it'll be difficult. And four influence is quite restrictive, so probably only Shapers will attempt it.

Also, don't use drugs if you are attempting an Encore. You'll end up paying your dealer for nothing.

(Quorum era)
quailman2101 253
I'm not sure how Ash would "ruin" Encore, it doesn't stop the run from being successful? — Yziel 17 Jan 2017
Indeed, you are right. Correction incoming. — quailman2101 17 Jan 2017
One thing that this might do: protect you from Midseasons/HHN/Punitive/Power Shutdown/etc. A lot of corp cards say "play only if the runner made a run last turn" - but, if you manage to steal an agenda out of a central server, and then play Encore (then money/draw up), it wasn't really your 'last' turn in which you stole that agenda / made that run. — Acatalepsy 25 Jan 2017
Don't runners have 4 clicks in a turn? Why are you talking about gaining three clicks? o.O — Mantriel 18 May 2017
Oh, now I get it. You pay a click to get four clicks I get it. But in this case why don't you count drawing the card for a click? gaining two clicks in total? o.O — Mantriel 18 May 2017
The best way to use encore is probably to do Apocalypse and Encore on the same turn, giving yourself a full turn to kick the corp while they're down. Comet, Out of the Ashes, and maybe Hyperdriver are decent in-faction ways to pull it off. If you're importing, Doppelganger, Early Bird, and Amped Up are possibilities. — OrionJA 2 May 2018