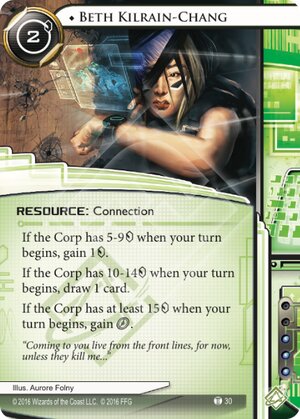 If the Corp has 5-9credit when your turn begins, gain 1credit.

If the Corp has at least 15credit when your turn begins, gain click.

"Coming to you live from the front lines, for now, unless they kill me..."
Illustrated by Aurore Folny
Decklists with this card

Her numbers are just insane, any Corporation under 5 credits is poor enough to be losing the game and it's extremely easy for them to go over 15 credits just by playing a couple operations or spamming two assets. In fact, you can force them to get so much money by stockpiling credits and locking the remote.

It's only drawbacks are that it's only suplemmentary economy. But damn, it's good!

(Blood Money era)
Erik_Twice 2038
I'm not seeing how this is better than Underworld Contacts assuming you have 2 link (and I think link is relevant again). Underworld contacts is a guaranteed credit and you can install multiple copies, so no dead draws. Even though card draw is valuable, getting a card draw when you aren't deliberately intending it isn't as useful as a credit, IMO. I can see this being useful when UC cycles out. — CascadeHush 13 Jan 2017
3

If it isnt firing the corp is probably losing. A free credit/turn with easier requirements and lower install cost than data folding? Pretty good if you ask me. A free card or click? Wyldside and Pancakes showed us just how broken those things can be.....

(Blood Money era)
willsta 90
It is super good. Get it out early and it'll pay off big time with extra credits and draws. If you are facing a corp running Restructure or the like, you may even get some free clicks! If this doesn't fire on a particular turn, then no big deal; it is always nice when the corporation has no money. I don't see any reason not to include at least one in any Shaper deck from here on out. — quailman2101 22 Aug 2016