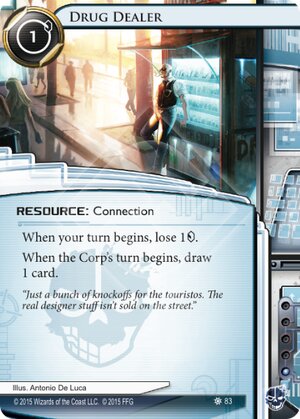 When your turn begins, lose 1credit.

"Just a bunch of knockoffs for the touristos. The real designer stuff isn't sold on the street."
Illustrated by Antonio De Luca
Decklists with this card

This has to be the nicest drug dealer on the planet.

"I'm sorry Mr Drug Dealer, I don't have any money for you this week."
"That's okay Ken, I know times are tough. Have some drugs anyway, and pay me back when you can!"

"I had the money for you yesterday, but then last night I got a bit carried away in the work shop and now it's all gone."
"Perfectly understandable, Nasir! See you next week!"

"I spent all my drug money upgrading my study guide, sorry."
"Education is very important, Hayley! Stay in school!"

(Fear the Masses era)
aloobyalordant 143
Not to mention when he sees you on the big screen giving Daily Casts and still buys the fact you can't pay him as you're off to get your paycheck. — RubbishyUsername 11 Jul 2016
Thanks for brightening my day, mate. I both laughed my ass off and felt sorry for the poor Dealer at the same time. — H0tl1ne 11 Jul 2016
3

I once read that the fundamental runner strategy could be written down as "Draw cards, get breakers, get money, run." There are exceptions, Noisemill decks being the most common deviant, but most runners follow this general pattern.

Drug Dealer helps one of these steps at the expense of another. Drug Dealer draws you cards, but costs you money. And it does so at the base rate of equivalency; 1 = 1 = 1 card drawn. So why would this be a good thing?

Well, simply put, it's easier to turn cards into money than it is to turn money into cards. Take the simplest example, Sure Gamble. If you have a Gamble in hand, then the next time you would spend a click for a credit you can instead spend a click for a gain of 4. This means that the mere act of drawing a Sure Gamble is essentially worth 3. So if Drug Dealer gives you a Sure Gamble, he's paid off for that turn and the next two.

But, you need money to run, and drawing cards doesn't help that. (Unless you're playing Faust, of course.) If you're spending all your Sure Gambles and Daily Casts just keeping up with your dealer, then you're never going to have the money you need to actually install breakers and get in when you need to.

Meaning that if Data Dealer is your draw solution, you need to have a lot more economy in your deck, for two reasons. The first is consistency in your draws. If you've got 9 econ cards in a 45 card deck, you will see some money every fifth card on average...but you might have a dry spell of 7 or 8 non-econ cards in a row, and with Drug Dealer keeping you broke the corp has ample time to score out. Going up to 12 or more econ cards helps keep dry spells short.

The other reason is that a lot of economy in Netrunner is impermanent. Event-based econ is single use, and Daily Casts, Armitage Codebusting, and Liberated Account all run out eventually. If these are your economy, then there are only so many credits you can efficiently gain, and many of those are going to get burned to Drug Dealer. So you either need to run a lot more of it, or fall back on stable, long-term investments like Magnum Opus, Kati Jones, Desperado, Underworld Contact, or Data Folding.

(Old Hollywood era)
tiedyedvortex 4712
Also fun to have Dr. Lovegood take care of the Drug Dealer. All the rush, none of the cost. — slobad31 20 Aug 2015
the Game) only say that the corp can — ende23r 20 Aug 2015
@closing thought: you draw the cards on the corps turn, *after* discarding to your hand limit. — Crashdown 20 Aug 2015
As it seems @ende23r was trying to say, the Runner doesn't lose the game for being unable to draw a card when his or her stack is empty. — Jeffrey Bosboom 20 Aug 2015
Something that might be worth adding is that this card is an interesting supplement to Desperado. Instead of a credit per run, it basically becomes a John Masanori without the tag. — skyrunner36 20 Aug 2015
Considering the interactions coming in Mumbad, how did this card not get seedy as a subtype? — LynxMegaCorp 20 Sep 2015
One really cool point: because of the timing, this is a decent resource to play in a "tag me" deck. Even if the corp decides to trash it, the runner has already received the draw without paying the credit. It costs the corp one more credit, but is otherwise an equal exchange. — primetimeblues 29 Sep 2015
Not Seedy, Lynx - it came out in Old Holywood. This guy sells the top end stuff. — Brendan 30 Dec 2015
1

My favorite new card that makes playing on OCTGN a pain. Drug Dealer is at home in a connections deck where he can be tutored with Hostage at the beginning of the game and trashed before the end with an Aesop's Pawnshop. With The Supplier and Underworld Contacts installed you can use all kinds of start of turn shenanigans to lose as few credits as possible. With 1 credit in the bank, you can take 1 from a single Underworld, install Logos from The Supplier, trigger your Drug Dealers at no loss, and trigger your remaining drip economy. Call In Favors lets you bounce from near 0 to 10 or more to install an Overmind and close a scoring window. With Off-Campus Apartments on top of Drug Dealer, you gain monstrous card draw. You can burn through your deck by moving the connections you drew with Drug Dealer onto The Supplier and then into the Off-campus Apartment.