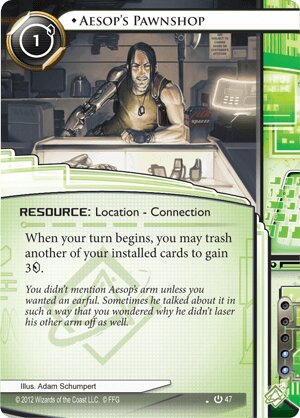 When your turn begins, you may trash 1 of your other installed cards. If you do, gain 3credit.

You didn't mention Aesop's arm unless you wanted an earful. Sometimes he talked about it in such a way that you wondered why he didn't laser his other arm off as well.
Illustrated by Adam Schumpert
Decklists with this card

Aesop's Pawnshop may not seem like a particularly flashy card, and it may not seem like a card you should bother yourself with at first blush. "Why would I bother trashing stuff from my rig, if everything I put into my deck has a reason to be there?"

Decided to bring some extra Links only to find you're playing a slow glacier deck without any Traces?

SELL IT FOR CASH!

Magnum Opus petered out and you'd really like to get an extra MU back?

SELL IT FOR CASH!

Taking the last 2 credits off Daily Casts? Instead...

SELL IT FOR CASH (and take 1 extra credit)!

On top of that Aesop's Pawnshop is a connection which will stack nicely with Calling in Favors, which is cheap enough to splash into most decks.

So this card is critically important to many small program builds like Noise, Hayley and technical Kate because it makes the low cost/low value programs and hardware playable. With Aesop's in play any limited utility or one time use program like cache, imp, d4v1d, lady, etc become an additional three credits of econ.

This means for most of them you get to use them AND gain a profit from them. This core set card breathes live into a lot of cards that would not be playable otherwise when fighting for deckslots. It makes provides click less economy for cards that you want to get rid of and recur maximizing shaper bullshit and enabling noise economy to work.

(Data and Destiny era)
CodeMarvelous 19855
I think this should only target Programs and Hardware. Wouldn't have a huge impact, but I think it would make more sense, become more focused and not work on face-down cards. — LynxMegaCorp 18 Nov 2015
I don't think Aesop working on face-down cards really unbalances the game. Apex can't install Aesop unless the corp plays Cerebral Static, other factions need to import either Hunting Grounds, Harbinger or Apocalypse to get face-down cards. — Zakalwe 18 May 2016
3

5 years later (last review was in 2015), Aesop is still the best Shaper ressource, sharing the spot with Professional Contacts.

At 2 influences, it can be used anywhere. It is such a powerful card. There are also major synergies with many faction cards.

Unlike Pro.Co,, Aesop require you to build a bit of your deck around it. But Aesop enable a lot of deck. At 1 cred to install and 2 influences, it is a serious option to consider.