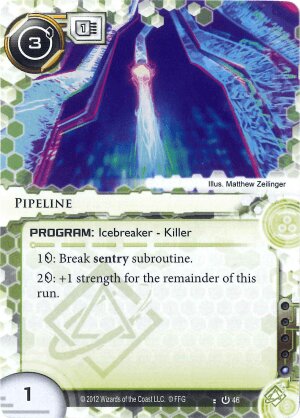 2credit: +1 strength for the remainder of this run.

Like any 2c: +1 Strength breaker, Pipeline shines brightest with Datasucker. It's problem, of course, is that Mimic and Femme Fatale are only one influence each; Mimic costs the same as Pipeline and doesn't require sucker tokens to break Guard, Architect, or Fenris, and Femme Fatale has a bonus that combos with shaper's Test Run for amazing ability to get in to any server if you really need to.

So is there a place for Pipeline in any serious deck? Probably only as a niche meta call, and you would certainly never use it out of faction. If you find that corps in your area tend too lean heavily on Rototurret to force a killer install, Pipeline might find a place as a 1-of Self-modifying Code target.

In an aggressive Rielle "Kit" Peddler: Transhuman deck where influence is tight and Tinkerings and Datasuckers are plentiful running Pipeline is sort of like running Snowball over Corroder. Mimic is still better, but if it means getting that third Datasucker or an extra Stimhack, it's not so much worse that it would be unimaginable to save the influence point.

(All That Remains era)
EfficiencyCommittee 216