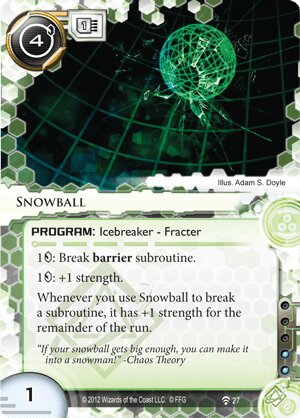 Whenever you use this program to break a subroutine, this program gets +1 strength for the remainder of this run.

"If your snowball gets big enough, you can make it into a snowman!" -Chaos Theory
Illustrated by Adam S. Doyle
Decklists with this card

So Snowball gets a lot of flak for not being better, or even as good as, Corroder. If this were in any other faction, I could agree with that statement, but in Shaper, I've found it can really shine. That said, it should not be used without support from cards that can mitigate its big weakness—the base strength. Yes, I know, installation also costs more, but Shapers (Kate especially) have more than their fair share of tools in faction to address this. The bigger problem is the initial buff cost to break the first barrier that crops up every time you make a run.

So how do we solve this problem? Well, if you've also got Atman in your deck, odds are you already have one potential solution included, which is Net-Ready Eyes. Need that for the Atmans instead? Well, Dinosaurus or The Personal Touch can help. Still not satisfied with the available options? Now that D&D is out, if you can spare a few influence and , Multithreader can work wonders. Lastly, don't forget the 2 on The Toolbox if you're using that.

Of course, it's not all roses even with these options, as things like a 10 strength Curtain Wall are still costly to get though. But short of Femme Fatale or an Inside Job, these will be taxing regardless of the fracter you're using, and Corroder is, at best, 1 cheaper on the initial break. And if they have any barrier ice behind the first, this is almost always on-par if not cheaper than Corroder for those centrals or scoring servers you'll be hitting time after time.

Lastly, I'd like to touch on the subject of advanceable-for-strength barrier ice and what it means for Snowball compared to Corroder. Most people think, "Ah, if they're running advanceable ice, they'll just buff the outermost barrier ice, negating the persistent strength bonus for the run." While it's true this is what the corp wants to do, it's actually a lot harder to accomplish than it sounds. Usually those corps that bother advancing said ice are doing so in hopes of using Commercialization for a big boon to their economy. And when they're in that situation, they like to start advancing early, and they like to advance as few pieces of ice as possible, as Commercialization is single-target. Compound this with the fact that newly installed ice must always be installed in the outer-most position, and you'll quickly realize the dilemma this causes the corp.

"But they'll just avoid stacking barriers then," you counter. Fine! Then Snowball has done its job without even spending a single credit during a run. Let's see Corroder pull that one off. Ultimately, I think the biggest deterrent to including Snowball isn't advanceable barriers at all, but Wraparound, as the extra 2 install cost can really hurt early on, which is the only time Wraparound is effective. That said, I still think Snowball deserves a second look from anyone creating or modifying a Shaper deck, particularly if they already have some of the supporting cards present. I love to free up the influence spent on Corroder for an I've Had Worse.

Compared to other fracters, this has a higher install cost than Breach or Corroder, lower power, and only becomes stronger in very specific instances. +1 per ice broken is unwieldy unless a server has a huge reliance on barriers. For example, you would need to run into all three of a deck's Eli 1.0 in one run to equal a Corroder in credits. It would be more reliable if it kept strength like Gordian Blade or Pipeline, but as it is, it is difficult to recommend.

(Order and Chaos era)
Steamwood 300
Actually, Snowball would cost 10 credits vs. Corroder's 12 to get through 3 Eli in a row. — Heinrich 18 Feb 2015
Don't forget, it's "+1 per subroutine", not per ICE. That give Snowball a bit more of a punch. — Hongkong Koma 18 Feb 2015
Still underwhelming. The "snowball effect" will almost never matter, and when it does it's unlikely to matter more than Corroder +1 permanent strength and -2 install cost. — Kroen 18 Feb 2015
I think it is worth pointing out that this card, unlike Breach or Corroder, is a Shaper card. Yes, it won't be as efficient as either of those, but it doesn't completely suck and can be included in a Shaper deck at no influence, freeing up that precious resource for other cards. If you have the influence to include Corroder as a Shaper, do so, but otherwise, use this. 1 credit for +1 strength and 1 credit per subroutine is actually pretty good, compared to some alternatives. — Mateus_ex_Machina 27 Feb 2015