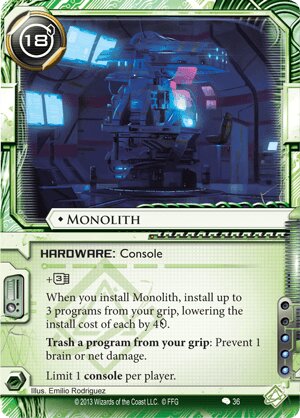 When you install this hardware, install up to 3 programs from your grip, paying 4credit less for each.

Monolith... ah. An unbelievable efficient console, costing 6 credits for 3 MU and 3 bonus clicks if you pull it off, and with a really useful way of preventing brain damage. But it costs 18 credits, a figure that makes this card near unplayable. You need 18 credits, 3 programs in hand, and a way to stop the corp rushing you while you get credits. Your Icebreaker suit needs to be really expensive to get full benefit, like Torch (or Yog.0), Garrotte (or creeper), and Battering Ram, all near-uselesss without another way to get it out. But if you run another way to get your breakers out, then Monolith becomes redundant. I have made deck that are originally built around Monolith, before I realise that it become surplus to requirements almost every time. Whatever deck you want, another console is normally better. Want to play massive fixed-strength breakers? Run Dinosaurus, Datasuckers and The Personal Touch. Want to play Stealth. Use Armitage for credits and just use SMC for tutoring the OOF breakers. Monolith is a good example of a card that is 'efficient' but in such large quantities that you will lose the game before it becomes relevant. If you want to build a deck that uses him well, it is either lost without it, in which case your inability to tutor for hardware makes it inconsistent, or you work around monolith, when he become a waste of space. Monolith also causes you to run less OOF breakers, as you need them in your grip to trigger monolith, and most builds of Shaper at the moment use SMC to tutor the 1 of of your OOF breaker. This means that, overall, Monolith is a bit rubbish

(Breaker Bay era)
Nerdfighter 67
Be afraid when we get a Test Run for hardware. Be very afraid. — Kroen 26 May 2015
You've heard of Tyson Observatory right? — UminWolf 27 May 2015
But in reality, I think Monolith (so far) is only good in a Motivation style Kate deck, because you can Eureka it into play for 7 credits. So I can see it hitting the table; it's the needing a grip of programs to get the full benefit, like you stated, that I feel makes this hard to really run. — UminWolf 27 May 2015
It's been a while ago since there was talk about this console, but isn't this also a great console for Adam? If you have 2 or 3 Monoliths in the deck and you happen to have an Emergent Creativity and a Monolith, you can install a Monolith for 2 credits. I'm not sure if Adam needs the extra 3 MU, but the damage prevention might be nice (especially with the ABR directive). Just a long shot, but maybe something to think about (I loved Monolith back in the days and I could play with it). :) — Menghini 28 Jul 2018
Not exactly a timely response, but Safety First makes getting a Monolith combo that actually includes installs exceptionally hard. Emergent Creativity/Monolith Ayla is actually a competitive deck, though. — CelestialSpark 7 Oct 2018
You can use Rejig to trigger install ability again and again — zmb 29 Apr 2019