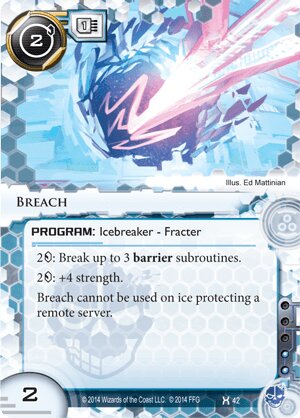 Breach is an astoundingly good Barrier breaker, lagging only 0.10 behind Corroder when comparing average costs. In fact, Breach defeats many commonly seen Barriers even cheaper than Corroder, usually by more than 1, while breaking even with other common ICE.

Notable ties include Eli 1.0(4 vs. 4), thought you will find yourself paying another for Wraparound and Ice Wall.

For Criminals looking to focus their eyes on centrals, saving an influence on a second Corroder, and/or looking for some Blue Sun hate, Breach can be considered cool enough to be in the same room as Passport, while Alias weeps in the dumpster out back.

(Order and Chaos era)
hi_impact 1713
This is a really helpful review - too many people see the 2/2 cost to pump/break and ignore the rest of these benefits! — GordonsBeard 3 May 2015
It is worth noting that it takes 2 more credits to break Wall of Static with Breach than with Corroder. — syntaxerror111 8 Oct 2015
NEXT Silver is really common in HB at the moment (Feb. 2017)..Breach is really good in that match up. — FightingWalloon 9 Feb 2017