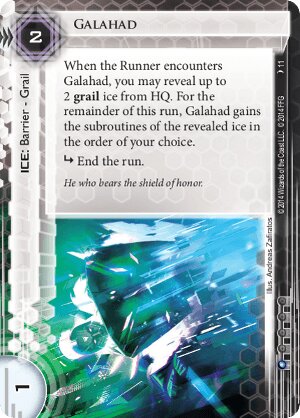 When the Runner encounters Galahad, you may reveal up to 2 grail ice from HQ. For the remainder of this run, Galahad gains the subroutines of the revealed ice in the order of your choice.

He who bears the shield of honor.
Illustrated by Andreas Zafiratos
Decklists with this card

For those wondering if you can add subroutines before ETR, from the official FAQ:

"Can the Corp add subroutines to a piece of grail ice in any order (by using other grail ice)?

Yes. The Corp can add subroutines to grail ice before or after any subroutines, including the subroutine printed on the card."

Galahad is commonly the front-man for a Grail Ice Suite. It is cheap to rez at only 2 and most players face-check using a sentry breaker and may not be prepared to get damaged by a barrier.

Galahad can support or be supported by Lancelot for program desctruction and/or Merlin for net damage and a potential flatline. Another less likely possiblity is Excalibur which may or may not be relevant depending on which server you have located your Ice on. Often central servers get run 1st in multi-run turns, either to deactivate Jinteki: Replicating Perfection, build up Datasucker tokens, during a multiple-run Medium dig or sometimes during a Account Siphon/Vamp and then run unrezzed Ice play. Defending a scoring server with Ash 2X3ZB9CY, Caprice Nisei, Red Herrings, a Nisei MK II agenda token or even Marcus Batty becomes much more effective when it is their own run that turn.