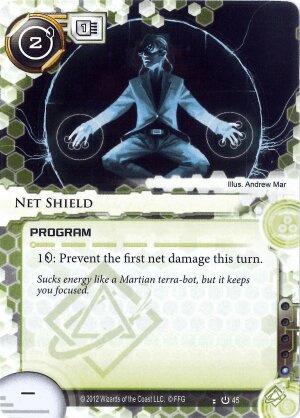 interrupt → The first time each turn you would suffer net damage, you may pay 1credit to prevent 1 net damage.

Sucks energy like a martian terra-bot, but it keeps you focused
Illustrated by Andrew Mar
Decklists with this card

If the local meta is full of Personal Evolution or other versions of Jinteki 1000 Cuts, Net Shield becomes a very useful card. It allows the runner to play a lot more safely and more aggressively against decks where net damage is strong. Unfortunately, it does absolutely nothing against decks that are not using net damage, which is where it has seen some issues.

There is also Feedback Filter which can protect against two types of damage, and does not take up precious MU. It is more expensive to protect with, however, but it is also not limited to once per turn. If net damage is prevalent in the meta, then these are considerations that have to be taken when building a deck - Is Net Shield or Feedback Filter a better choice? That all depends on the rest of the deck composition and if single pings of net damage are more a threat or multiple net damage a turn is.

As Clot pushes players away from Fast Advance, Jinteki is starting to push into the front of the world meta. Replicating Perfection and Personal Evolution are strong contenders in tournaments, and that makes the consideration of cards like Net Shield being played a much higher possibility. While it may not have seen a lot of play in the past, as the meta evolves and players look for tools to deal with the current ‘strong’ deck types, Net Shield can shine.

(Breaker Bay era)
lynkfox 381
Chronos Protocol decks may loathe this card, as well if it gets put into many Shaper concepts. — esutter479 10 Sep 2015