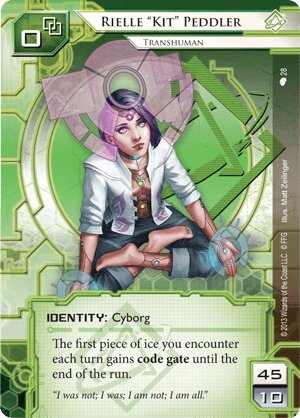 The first time each turn you encounter a piece of ice, it gains code gate for the remainder of this run.

"I was not; I was; I am not; I am all."
Illustrated by Matt Zeilinger
Decklists with this card

Basics: with less influence than all shapers save for Professor (who ignores influence as his ability, so....) you are taking Kit for her ability and only her ability.

No matter who you look at, of any and all other runners, with a single breaker and a a few credits Kit is still the safest face check in the game. To Kit with 3 cards, 3 credits, and a Gordian Blade A Komainu is as as dangerous as an Errand Boy or a Bastion. All are a 3 break if they are the ICE you are running blindly into.

Literally, if your first turn is a Sure Gamble, a Cyber-Cypher, and a The Maker's Eye you can run R&D on the first turn and know you will get in, unless the corp has ICE stacked two deep or more than 10 credits or they have Wraparound in the opening hand. And for most ice, it costs as many credits to break as the ice has subroutines.

Go to Sneakdoor Zeta for an example and you'll see using Rainbow and Chimera as examples that Decoders are often cheaper overall than Sentries as breaking. Late game, this can simply be a way to make sure you have cheap breaks.

And a dozen more ways to say, you can get by cheaper safer runs with Kit than with any other runner.

So why isn't she more dominant? 10 influence is a killer for sure. Want to run Spooned to be able to destroy that major piece of ice? Well it's close to 1/3 of your influence right there. You have to make hard choices.

Code gates often want to sit on the outside anyway? Chum... Inazuma... even Builder and RSVP... You don't want all code gates out front, but many of them work well at the outermost ice in a server. And so your ability is a little moot.

The ability only works on the first ice you encounter on the first run you make in a turn. On your second run, you are just a easy a victim as Kate "Mac" McCaffrey: Digital Tinker, only you didn't get the link, the econ ability, or the extra 5 influence.

Wraparound still works just as well as it does against AI breakers (although Swordsman is a joke).

Make a deck that only intends to run once a turn. Perhaps you can spend all the clicks on Magnum Opus or simply plan to use Lockpick for all your econ knowing you let the Rig do most of your work.

Use all your shaper tutor power to simply make sure you always know the tool you need. Maybe they had to run get a Chum to feel safe? Fine, but by then you still knew what was behind the chum and had the time to go get the breaker for that.

Paintbrush is really click intense and means you need to be a big rig builder even if you can trust in having some easy code gate power. Unless you are sure you can trust the corp to

Spooned sounds like a good idea, except that you almost would rather break the non-code gates since those are the trouble ones one they aren't the first ice in a turn.

ZU.13 Key Master is usually a great cheap breaker for aggressive running. But it's the wrong way to go here. If you plan to run more than a few times in the whole game, splurge dude! It's not like you are Exile and need something you can pitch when every you want. Perhaps you skimp on a killer or a fracter, but this is going to be your big boy. Make it something you know you will use and use and use.

(Order and Chaos era)
Goldstep 90
If you're running Kit without splashing at least 1x Spooned, in my opinion you're missing a golden opportunity. — KitsuAeryn 27 Mar 2015
"Spooned sounds like a good idea, except that you almost would rather break the non-code gates since those are the trouble ones one they aren't the first ice in a turn." What Spooned does is make Kit's ability relevant on the next piece of ice in the server, creeping you closer to its heart. Unfortunately, you won't be able to take advantage of this on the turn you Spoon, so they can always plug the hole up next turn. — Bigguyforyou518 28 Mar 2015
One of the most hilarious interactions is if the corp has Mother Goddess up with another ice outside of it. One opponent was shocked when I broke his Mother Goddess with a Cyber-Cypher, only to have me point out that the ice outside of it was still a code gate. — Salrantol 29 Mar 2015
I tried the Spooned thing. The problem is that it takes too long to be effective. Usually I won games through pure econ advantage, typical Shaper style. Right now I'm thinking that the right way to play Kit is to just use her ability as an early threat while you build up your econ. Squish the Corp's mid-game advantage into a tiny window. — EnderA 4 Apr 2015
Ive tried once or twice further, and I would say for those who wanted a spooned, instead of spashing for spooned, splash for knifed. Costs less to play, gets rid of those expensive barriers (only have to break Eli once, even if they install over it before you can run it) and remember, we add code gate, but w don't lose what it already had. Barriers are a shaper weak point and code gates are so fix the barrier, not the code gate. — Goldstep 20 Jul 2015
Omega is quite powerful with Kit. Running just that alongside a good Decoder lets you crack one-deep servers all the time and two-deep servers once per turn with ease. — LordRandomness 27 Jan 2016
Also, in terms of safety Nero Severn gives her a run for her money nowadays. He might (ironically) faceplant into nasty Code Gates, but he doesn't even need a breaker or creds to bail out of a nasty Sentry rez. — LordRandomness 6 Jun 2016
1

Boy Inversificator is sure a card now. You don't care until they have 3 ice on a server, and then you play Egret on the 3rd one if you REALLY need to.

It works really well, and boy it's not very interesting or fun for the Corp having all their ice just get invalidated and swapped around to the least-expensive potential combination.

(Free Mars era)
Dragoonkin 328
You don't actually use Egret. You just use multiple Inversificators; I've seen Inversifikitor decks have all three out to slice through 4-ice servers. And, to be honest, it is always amusing and weird to watch. — Gargulec 30 Jul 2017
1

Kit is second in the title of strongest shaper, after Hayley. Kit used less often probably just because 10 influences is really low. But her ability make her second to none when it come to breaking ices.

Why? Because with only one breaker, Kit can facecheck any ice on the board. And Shapers have the best breakers in the game. It all depend of your game plan.

Want to go for the best and most popular breaker : use Engolo. It will ensure you can pass the first TWO ices of any servers.

Want to throw a wrench in the corp plans : use Inversificator. Changing ice placement will ensure easy runs where you want it to be easy.

Want to go for a stealth deck : use Houdini or Penrose.

It is worth mentionning that Kit is an amazing target for Rebirth for any Shaper. Thus allowing you to have 15 influences to spend and switching to Kit will make passing ice much easier.

In every iteration of the art related to Kit, I find Kit to be the most zen of all the runner. After all, she is... the one.