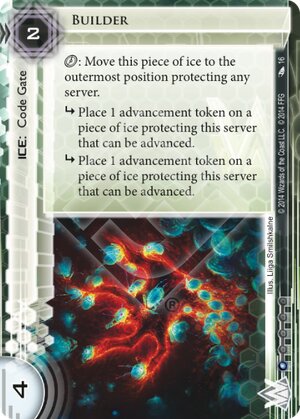 click: Move this piece of ice to the outermost position protecting any server.

subroutine Place 1 advancement token on a piece of ice protecting this server that can be advanced.

subroutine Place 1 advancement token on a piece of ice protecting this server that can be advanced.

I love builder. It is cheap to res, it is mobile, it's expensive to break, and it quickly builds up ice all over the board. This thing can make am ice wall really hard to break really quickly, and it will get your cosmic ice out cheaply. The best part is that it forces the runner to essentially help build your servers, how can you not love it?

(Order and Chaos era)
Bobbydigital 4
The sad thing is they will only let it trigger once. However having a 4 strength, 2 subs ice they want to break is pretty nice. — Capstone 5 Apr 2015
Don't forget the other important thing about builder, movement! — JJPearson 21 May 2015
And by that I mean it can function as inside job protection and shut down Kit's ability and protect other codegates from spooned. And it never suffers from the normal positional ice problem. — JJPearson 21 May 2015
2

Builder is an interesting piece of ice.

First off, 2 to rez for a 4 strength ice with 2 subroutines is totally calvinball. The basic Gordian Blade take 4 to break, and it is not immediately in Yog range. Code gates are also not really done in Weyland, so this card is a bit of an unwelcome surprise.

If they break Builder the first time you rez it you've paid 2 to make the runner pay 4ish. That's obviously great (practically unheard of for Ice), and it only gets better if they keep running it. So what's the catch? I mean, ice with a better ratio than Eli 1.0 and no bioroid click through, that's crazy.

Well, the catch is what Builder does. It doesn't do any damage or end the run, all it does is buff the ice after it by giving it 2 advancement tokens. What do those do? Depends on the ice. The Ice Wall Fire Wall Hadrian's Wall style carrds get more strength for each token. The Tyrant Woodcutter style cards get more subroutines. For ease of reference we can say that they get 2 creds tougher to break, permanently.

Still sounds pretty good, right? I mean, 2 to break a 2 rez ice is acceptable even before we consider that it can snowball. Builder in front of advanceable ice is super efficient and taxing. It can even hop from server to server! So why don't we see it more often?

First off, this is positional ice, with all the irritation that that entails. It can't defend any server on its own. It isn't even normal positional ice, it is positional ice that only works in front of advanceable ice. That means that in your deck building its hard to treat Builder as Ice, since it can't stop the runner unless it combos right. Do you slot it in instead of a support card?

Beyond that, the ice that Builder buffs aren't very popular. I've never seen a Tyrant in the wild, and typically ice wall is just quick gear check ice. Advanceable ice generally isn't played, so a buff for it is in a weird place.

(Data and Destiny era)
Waltzard 388
Sadly the advancable ice suite suffers greatly from ice destruction. Given that Parasite is run everywhere and Apocalypse is a disaster for you, i see no great future for them in competetive. — Capstone 11 Nov 2015
I agree that it certainly isn't fit for competitive play, but Builder in front of space ice (Wormhole, Nebula, Asteroid Belt, and Orion) can give you a steep discount, rather than simply adding tax to the next piece. — slobad31 11 Nov 2015
The problem with Builder is that when the Runner realizes you need it to rez your Space ICE, they can break it. Especially true with Shapers and SMC. — hi_impact 11 Nov 2015
In short, I think Builder is actually best with 'infinite' value stuff like Ice Wall, Fire Wall, Shadow, and all of the crappy subroutine gainers. Which isn't a good group for this ICE to be friends with. — hi_impact 11 Nov 2015
Anybody think Magnet will validate advanceable ICE? it will blank any Parasites, but I think cutlery is still a thing. Don't know if we'll ever see adv ice be competitive without silly combos. — PureFlight 26 May 2016