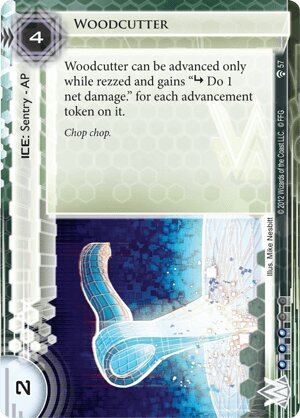 Woodcutter can be advanced only while rezzed and gains "subroutine Do 1 net damage." for each advancement token on it.

Chop chop.
Illustrated by Mike Nesbitt
Decklists with this card

The least subtle sentry around, this card does nothing when first rezzed. Much like a real lumberjack clearing trees, this card is obvious and makes a lot of noise before it damages bystanders. Replacing "Timber!" with "endlessly advancing this ICE", both are clear signs of danger. With no free way to break sentries like Bird Lady does for barriers and Yog for code gates, each advancement will usually cause the runner to pay at least 1 extra per token. As such, it could eventually become a huge paywall in a glacier deck. It has synergy with Satellite Grid so it actually does something when rezzed, as well!

On the downside, so many cards are much, MUCH better than this. Net damage is a rarity in Weyland, but there is almost no way to force it on. This cannot be sneakily advanced while unrezzed like Ice Wall or Nebula, so the runner will know exactly the cost to get past this every time. It's 5 and an advance before this card does anything, as well. If you need to diversify damage in Weyland for some reason, this is not the answer you are looking for. Jinteki is the king of net damage for a reason, pick up a Komainu to (probably) deal more damage for the same starting cost. Or, if you like ICE that does nothing when rezzed, check out the slightly more useful Tyrant.

(The Underway era)
Steamwood 303
The problem with this ice is Parasite. When you spend credits to advance it, it gets wiped out and you lose all those advancements. Same problem with Tyrant. — tendermovement 5 Aug 2015
It'll only get better with pad factory, and hopefully someone will make a decent deck with this and blacklist in it to avoid instant parasiting, so woodcutter sees more play. — cmcadvanced 6 Aug 2015
No free way to break sentries? How about Faerie? Sure, it gets trashed, but it will get you through when you need it. Or buy you enough time to find Switchblade:):) — toiry 7 Aug 2015
Yeah, Faerie does it in a pinch, but not as reliable as the others! And Switchblade, oh lordy. Lumberjacks apparently get toasted by fancy knives. — Steamwood 7 Aug 2015
In my head I'm thinking, in Jinteki... throw it on a scoring remote that you'll only use once... once it's rezzed don't put anything behind it so the runner has no reason to parasite it... Slow advance it to 6 tokens while setting up wormhole and Marcus batty on another server. Then let the runner play Russian roulette psi games. It sounds damn near impossible to setup, but I am going to try it! — greylin 27 Aug 2015
Wormhole and Marcus only fire a single subroutine though so you'll only be doing 1 net damage. Neural Katana or anything that does brain damage would be better for that sort of play. — Genevaman616 27 Aug 2015
0

First time you rez this piece of ice, it'll do nothing unless combined with Satellite Grid or Amazon Industrial Zone. The first card will give it one advancement immediately so it'll gain deal 1 net damage, and the second will allow you to advance it right away after rezzing it.

Using Woodcutter with Amazon will cause it to cost 5 for the first rez and 1-2 more for the advancements. If used with Satellite Grid and Amazon you can give it 3 subroutines with the first rez, and in theory you could keep adding subroutines on it indefinitely. There are no sentry breakers that'll break all subroutines on a piece of ice, every one will cost 1 credit more. So, it could become something that no one will want to - or can - run through. This is it's advantage compared to Tyrant, which - if it was prominent in your meta - could be punched through by Morning Star for 1 credit.

The major problem with these two ice is: They are expensive for the fact that they do nothing at first and they have low enough strength that Parasite is a problem even without Datasuckers to kill them on the same turn as they are installed. You will spend your money and time and then they get trashed. Both pieces of ice are not bad if you're playing casual games where Parasite is not so prominent. But if it is around, they quickly become dead weight.

(Old Hollywood era)
tendermovement 49
Now... There's one new agenda that may give these cards a bit more power. Hollywood Renovation. It allows you to place an advancement on a card other than Hollywood Renovation when you advance it. This will allow you to bank your advancements on the ice and at the same time make it bigger. They're still susceptible to Parasite, but you're not wasting time only advancing the ice which might be destroyed at any time. — tendermovement 7 Aug 2015
Hollywood Renovation only lets you put tokens on cards that can be advanced though, which Woodcutter can't be while unrezzed. — Thaddux 7 Aug 2015
You say that there are no killers that break all subs. What about Faerie? Switchblade? — FarCryFromHuman 7 Aug 2015
And Shiv? *smirk* — LynxMegaCorp 7 Aug 2015
grappling hook and e3 Feedback Implants will get ou in there pretty cheap too. — Pilltechre 7 Aug 2015
How will you use Amazon AND Satellite Grid when both are regions? — Kasusfactus 7 Aug 2015
Forgot about Faerie for some reason, Grappling Hook + E3 too. Nevertheless, I hope the point came across that this ice is not very good for the reason that it is too expensive and slow to build up and too easily disposed of. Although it can be used in casual games. — tendermovement 7 Aug 2015