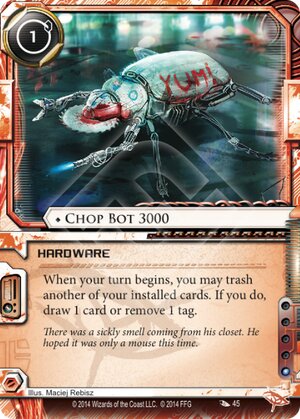 When your turn begins, you may trash another of your installed cards. If you do, draw 1 card or remove 1 tag.

There was a sickly smell coming from his closet. He hoped it was only a mouse this time.
Illustrated by Maciej Rebisz
Decklists with this card

Chop Bot is (currently) a very important card for Apex: Invasive Predator. It allows him to chop a card and together with Wasteland & Reaver and he gains money for them and get's card draw additional to the ability of Chop himself. He is part of the economy engine of Apex, as Aesop's Pawnshop is for Hayley Kaplan: Universal Scholar or Noise: Hacker Extraordinaire. On top of that he can remove Tags, so cards like Hard-Hitting News are not as awful as before as you will start with 3 Tags that need removal leaving one click when you have cleared the other 3.

Remember to keep one in hand, to install him after Apocalypse! To get the cards installed back into the heap. Also he works well with the conspiracy breakers (Paperclip, MKUltra and Black Orchestra), as you can install them with the Apex ability face down and chop them after, so they can be used in future runs and you don't have to overdraw. As well as Harbinger which can be used twice.

This can make an Apex deck with Faust really strong, as it enables additional card draw at the start of your turn.

Usually he will net you 2 - 3 extra triggers like:
1 card & 2 creds beside the Chop trigger.

I'd like to recommend the following deck, for the state of the Meta Start 2017: netrunnerdb.com

(Quorum era)
5N00P1 665
Nice update on the card, just one small additional note: The card doesn't have to be installed before Apex starts, since he can use his ID ability to install a card from grip at the start of his turn and instantly chop it in the same 'start of the turn' window, making the combo even easier to use. — Krams 16 Feb 2017
Is that true though? Start of turn isn't a window as such, and as the card was not installed when the turn switched over, would chopbot work? If it does it opens up lots of other OP combos in other decks. — Mattsetback 18 Feb 2017
Yes you can do it. You can use your Apex ability to install a card and then chop it. You will need to have at least one card installed to make it work i assume. — 5N00P1 12 Nov 2018
5

Aesop's pet robot? This card is a weird one.

Overall, it's fine. It seems fun and I think there will be some cute combos with Bad Pub decks, but other than that, it definitely won't fit in many places.

(Order and Chaos era)
BreadRising 175
Note that the tag removal is at the beginning of your turn, so you won't be able to remove a tag you got this turn... — Lokh 9 Mar 2015
Don't think a Valencia deck would need Activist Support right? — zzzzzuu 20 May 2015
4

(Order and Chaos era)
yithian 176
you might say they are on the chopping block — r2devo 12 Mar 2015
Worth noting that, because all your "start of turn" triggers enter a queue & must be executed, Activist Support will still give you a tag even if you trash it to Chop Bot. — phette23 26 Jan 2016
phette23, you can avoid the tag if you resolve Chop Bot 3000 before Activist Support. Look at the interaction between Aesop's Pawnshop and Wyldside on page 22 of the rules. — YourGo 25 May 2016
I don't think you can replace your console.. ever. If you install it, that's it. Not even a second install of the same console. — HandKing 1 Nov 2016
@HandKing You can't install a console if you have one installed. But if you feed it to the Bot, you can install a second copy or even a different one. — nydnarb 27 Nov 2016