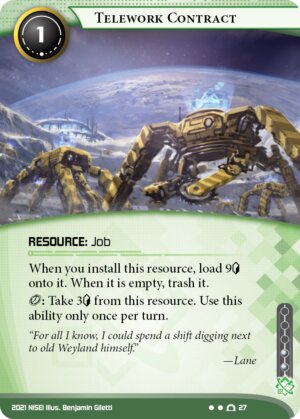 When you install this resource, load 9credit onto it. When it is empty, trash it.

click: Take 3credit from this resource. Use this ability only once per turn.

"For all I know, I could spend a shift digging next to old Weyland himself."
—Lane
Illustrated by Benjamin Giletti
Decklists with this card

This card is actually really good. It just hides it well, with numbers that feel unexciting.

"But wait!", I hear you say. "It's just a wimpier Liberated Account!"

And you're sort of right. But the key is, it's a liberated account that is significantly cheaper to start up and provides the exact same click efficiency.

Liberated Account, you spend 6 and a click installing it, and then you spend to get 16. So ultimately, counting the install click, you spent 5x to get 10. Liberated accounts is basically renting a Magnum Opus. It lets you convert five of your clicks into 2 each.

Now let's look at Telework Contract. You spend and 1 to install it, and after spending , you gain 9. So overall, (counting the install click), you spend 4x, to gain a net 8. Again, 2 per .

The three big differences of course, are the total output, the cost, and the speed. We'll get to speed in a minute. Let's talk about the output first: Telework Contract gives you 9, which looks downright pathetic, compared to the massive 16 that Liberated Account provides.

But you have to factor in the cost! Liberated Account costs a whopping 6 to install, which makes it much harder to play, and cuts into the profit considerably. Telework Contract only costs you 1 to start, which means that even if you start the turn broke, you can click for 1, install, and then spend , ending the turn at 3, (same as if you had just clicked for credits three times), but with 6 left on the card for future turns. That's pretty good recovery when you're broke!

The speed is the one place where it is a bit behind Liberated Account. Liberated Account could be installed and clicked three times on one turn, to start out next turn with a net gain of +6. (And one more 4 click saved for later.)

Telework Contract cannot match that speed. If you need to pull more than 3 per turn from it, then you're just out of luck. That said though, the comparison is not as one-sided as it might look! As mentioned, if you spend a turn installing and clicking Liberated Accounts, your 4 clicks net you a total of +6 for next turn. If you install Telework Contract, and click it once on one turn, and then once more at the start of the next turn, you've spent 3 clicks, for a net gain of +5. It's hard to overstate how much the reduced pricetag helps out Telework Contract. It really frontloads a lot of the credit gain. For the first two clicks, Liberated Account is actually worse than just directly clicking for credits. (at two clicks you have gained a net 2, and spent 3 clicks installing and clicking.) Telepresence breaks even on the first click, and just goes up from there.

Don't be fooled by the low-seeming numbers. Telework Contract is a solid econ card.

I think you're exactly right about Telework being a solid card. The only difference between it and Liberated that you didn't mention is that Liberated can be used mostly in one turn. But you're getting total payout a turn later at best with Telework, since you can only click it once per turn. Just something to keep in mind, but still a solid card.

Oh dang, I completely forgot about the "once per turn" aspect, and even used a bad example in my review! Thanks for the catch - I'll update accordingly!

You can get a bit more efficiency if you use Aesop to the the 3 credits on the last 3 credits. Letting you get 8 credits for 3 clicks total.

Nice review, and @Diogene made the comment that I was thinking as well. Keep up the good work Netrunner community.