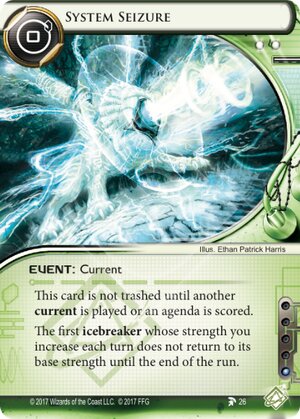 This event is not trashed until another current is played or an agenda is scored.

Naturally, this is most powerful with unconditional AI breakers (that is, AI breakers that when powered up sufficiently can break through any ICE that's not explicitly anti-AI like Swordsman). With such a breaker, System Seizure can save you a ton of money against big servers and a couple credits against smaller two ICE ones. Let's have a look at some of the candidates:

An honorable mention goes to Aghora, which while it can't crack all ICE will generally be targeted at ICE that is expensive to break, which makes a cost saver like this quite welcome.

Finally, it is a 0 cost 1 influence current which means it doubles as a good way to turn off the Corp's current in a deck that wants to use it. This might even make it worth using in cases where the benefit is more marginal.

(Station One era)
LordRandomness 236
You forgot to mention Baba Yaga. — Cantor 27 Mar 2017
Actually, there's no real point running this with Baba Yaga. You just slap Gordian Blade or one of the other breakers that boosts for the whole run on there and then you get the same effect. — LordRandomness 27 Mar 2017
I love it on my Criminal Baba Yaga deck with Breach Faerie and Yog.0. — wookiez 14 Apr 2017