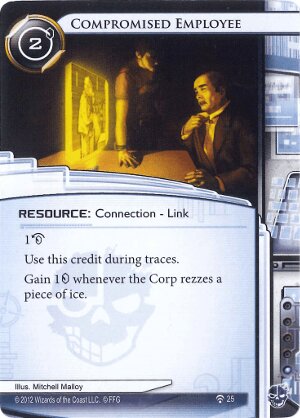 Use this credit during traces.

Gain 1credit whenever the Corp rezzes a piece of ice.

Illustrated by Mitchell Malloy
Decklists with this card

Compromised Employee is so close to being a great card. I'll say it's a fine card, but if I include it in a deck I often feel like it's not pulling enough weight for a card to be worth the slot. Why is that?

Primarily, you gain value from this card based on the corp's deck construction. Because that's out of your control, that means CE is inconsistent. Inconsistent cards lose slots to consistent cards.

Gaining 1 everytime an ice is rezzed feels so good, you know? It's like, "Wanna defend your stuff? Haha, I gain money, eat that!" Plus, being rewarded for derezzing effects like Golden, Emergency Shutdown and Crescentus is great synergy. Ankusa also fits this strategy, and CE's 1 influence makes it an easy import into decks.

It's a connection resource, so you can Hostage for it, Call in Favors from it, and get it from your Supplier.

At the time of writing, we're in a tag-heavy meta after the release of Hard-Hitting News. SYNC and CTM are prevalent, as are their trifecta of tagging tracers: Data Raven, Gutenberg, and Turnpike. Even so, I view the fact that the is not a is an unnecessary downside. Were traces really so weak that they needed to nerf a link card? Laaaame.

I think a situational econ card that takes like 4 uses of the card to start making it worth it (vs using the install click to gain a cred) is just a little weak. In faction, you'd almost rather have Easy Mark and just get the first 5 uses up front. Out of faction, I'd almost certainly use Deuces Wild for its flexibility at 1 influence.

Also, with the additions of Rumor Mill and Political Operative, glacier is particularly dead in its grave, so cards like CE that would shine against high-ice decks are weak at the moment. Conversely, Asset-heavy corps are doing well, so cards like Security Testing are doing much better over cards like this.

If I were to change this card now, I would make the a instead, and make it 1 to install. The faster return on investment helps make it worth the slot, The All-Seeing I makes Resources weaker, and it can falter based on the corp's deck construction. As it is, CE will likely stay in your binder until its rotation, barring the release of strong recurring derez effects.

(Blood Money era)
PureFlight 1047
I feel like Ankusa deserves at least a mention in this review! It fits right into the ice denial strategy. — LynxMegaCorp 26 Sep 2016
This card also has a potential place in a Sunny Lebeau deck. — Thaddux 26 Sep 2016
@lynx, u the man, adding Ankusa. — PureFlight 26 Sep 2016
@Thaddux Although you'd get to use the recurring credits for Nexus, I kinda feel like Power Tap is a little better in that situation. Although, her breakers are expensive, and getting some extra money on rez to break that ice with could be very welcome. — PureFlight 26 Sep 2016
It might be interesting at 2 recurring creds instead...in that case it's stronger against a single trace per turn, same strength against two, and worse against 3 or more. Ah well. — LordRandomness 26 Sep 2016
5

With the release of Data and Destiny, this card deserves a second look. A few things:

If the card only had one effect or the other, it wouldn't be worth it, but having two relevant effects in one non unique, one influence card gives it potential at least. It would certainly be cool to run a three deep server with Ash installed and 3 of these out: you get a free Stimhack and Ash has a base trace of zero. Something to think about.

(Data and Destiny era)
WayneMcPain 417
Works pretty nicely alongside Collective Consciousness as well — forktines 16 Dec 2015
I like this card. Having The Supplier makes it a lot easier to install. I like the idea of making a Sunny deck, with her console, 3 of these, 3 Power Taps, and 3 Rabbit Holes. Probably hard to get up and running, but amazing once it gets going. — quailman2101 17 Dec 2015
Truth be told, Sunny is amazing once she gets going no matter what economy package you choose. The problem is getting her going... — Sabin76 17 Dec 2015
I'd wager that FFG originally had this cards as +1 link, then decided it was too strong with Underworld Contact. Lame! would have been worth 2 install - as is, i think it should only have and install of one because the runner doesnt have control over when they gain credits with this. — PureFlight 26 Jan 2016
2

This can be a great card, depending on when you install it and your opponent's deck. 1 influence means it can be splashed in many decks. 1 credit may not seem like a lot, but it can easily build up, especially in the early game. And unlike Ice Analyzer, you can use these credits for anything. The recurring credit for traces is a nice bonus, and can be seen as a self-defense mechanism to prevent this card from getting trashed. Also of note, you gain a credit immediately after the ice is rezzed.

An install cost of 2 is a little expensive, especially because you are likely to install this right before running servers with unrezzed, unknown ice. If your opponent uses a lot of ice, you'll already be tight on creds for runs. If your opponent installs few ice, you won't benefit from this card as much. In addition, creds are directly added to your credit pool, which can be tampered with more readily than creds on Ice Analyzer.

Overall, this is a good econ card, but dependent on the cards on the table. It is worth considering in the average deck, regardless of faction or playstyle.

(Old Hollywood era)
yang573 31
Could be good in Nasir. — WayneMcPain 30 Aug 2015
nope this card is just bad. 1 recurring credit for Trace, really? I'd rather have 1 link up. — iceqs 31 Aug 2015
just clairifying the previous post, and if I know how Nasir works, you gain the coin when they rez, and then loose it when you encounter. With a workshop build it could be OK, but I don't see this being anything spectacular. — Tsgstarwars 1 Sep 2015
This is a nice supplement when you run The Supplier anyways. In any other case you might not want this. — Capstone 10 Sep 2015
0

With the release of Los: Data Hijacker, this cards moves from binder fodder to being interesting!

Besides the things already mentioned new cards are released that makes Los more interesting and even this card. As Los get 2 creds for the first ICE rezzed together with CE the corp might no be willing to rez some ICE anymore as you might get 3 - 5 creds. And not only this alone, when there is a Rubicon Switch out, you can derez it immediately after the run. So the corp is sinking it's creds, while you are earning money from it. Imagine a Vanilla, you get 4 creds, a successful run (with Desperado) and afterwards you derez the Vanilla. It costs you a click... but next turn, repeat. On top you can combine this with Keros Mcintyre which gives you 2 creds for derzzing. Derezing a low cost ICE gives you 2 creds extra beside the creds for the rez.
An interesting combo for Los, CE, Rubicon Switch & Keros Mcintyre.
On top of that, the questions is, are you playing Forged Activation Orders? Emergency Shutdown?
And what is your breaker Suit? I think Ankusa sounds interesting at the start (although no derez effect), but breaking Eli 1.0 for 8?? No, better do it with Paperclip for 3 and derez it for 3 sounds more intriguing for me and it doesn't cost you 6 to install.
The birds (Golden, Peregrine & Saker) might also be an interesting include, although they seem to inefficient to me and depending on the server the corp might be able to trick you....
On top CE is interesting against some pain ICE for Crims, such as Ichi 1.0, as you don't have link, you can use the creds so it's "only" 5 creds with Mongoose and perhaps you derez it afterwards ;-)