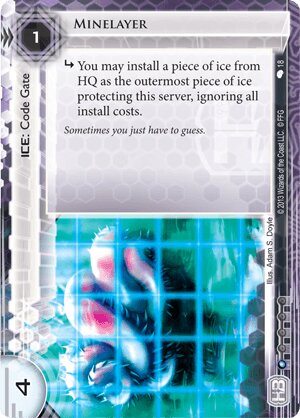 subroutine You may install a piece of ice from HQ as the outermost piece of ice protecting this server, ignoring all install costs.

Sometimes you just have to guess.
Illustrated by Adam S. Doyle
Decklists with this card

Minelayer is one of those cards I really want to like, but just can't. Why? Well, for starters, its is pretty damn amazing. When it fires, it saves you both the and the s that would otherwise be spent doing exactly what you want to do—ice up the server that the runner is running, to slow or stop repeated runs. But there lies the problem, as it's only when it fires.

The best card to compare this to is Architect. Still, there are a plethora of differences between the two, even if the don't fire:

Either way, no runner wants to let the on either of these fire more than once, so usually they end up being more tax than anything. But what happens if the do fire? Again, a comparison with Architect:

So, while I want to like Minelayer, and it may have some very niche applications, I can't recommend it over Architect. Yes, eventually Architect will no longer be tourney legal when enough additional cycles come out, while Minelayer will be around forever, but who can say that it won't be replaced by something just as good if not better?

(The Universe of Tomorrow era)
Pikeman 279
I don't quite follow the full comparison here. Of course, Architect is better than Minelayer. It costs 4x as much to rez. It feels like you are not making an apples to apples comparison here. How would this card compare to other 1 rez code gates? That seems like the better basis for judging its merits. — FightingWalloon 26 Oct 2016