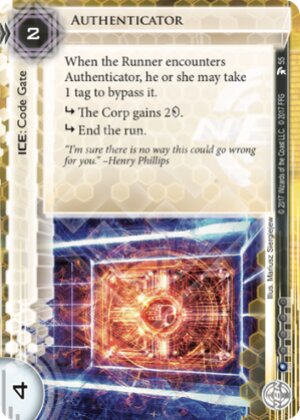 When the Runner encounters this ice, they may take 1 tag to bypass it.

"I'm sure there is no way this could go wrong for you." -Henry Phillips
Illustrated by Mariusz Siergiejew
Decklists with this card

A cheap but taxing porous code gate in the Eli 1.0 category of ice.

For a cheap cheap cost of 2 and at 1 influence you get a code gate that stops the runner and gives you back its rez cost to boot unless the runner either breaks it or takes a tag.

(First number is cost to break only second/ETR sub, second is to break both)

Against non-special-requirements decoders other than Torch it takes at least 3 to get through the ETR and often 4 to avoid giving the corp 2. That's not bad for a piece of 2 ice.

So what about the bypass? The cost is one tag. Without things like Aaron Marrón it takes and 2 to get rid of that tag. That's still decently taxing for a 2 piece of ice. With Aaron the bypass becomes free but Aaron counters are a finite resource and especially in the early game when Authenticator is at its best they're probably not available yet.

The runner could of course float the tags but that's always risky, especially if the corp playing Authenticator is NBN. Even if you clear the tag immediately afterwards there's an element of risk due to cards like Zealous Judge.

Authenticator is clearly NBN ice. It's taxing but porous. It won't stop the runner on individual high value runs (The Maker's Eye, last-chance runs) but over the course of a game it will slow the runner down while being very affordable itself.

(Earth's Scion era)
Silv 340
And if you are playing SYNC, it costs you 3 credits and a click to remove the tag, sort of forcing the runner to break this every time. — Cpt_nice 26 May 2017
Assuming the runner doesn't have other options like New Angeles City Hall. Not really worth running SYNC for, though if you are already running SYNC Authenticator of course fits in well. — Silv 27 May 2017
Based on UFAQ it's not possible to avoid tag and bypass this ICE. So New Angeles City Hall is not going to work here. — Urziel 28 May 2017
How is that ruling different from the ruling for Data Raven? — mrgoldendeal 23 Jul 2017
On Raven, it says "The runner must take 1 tag or end the run", so you opt to take the tag, then avoid it with NACH. On Authenticator, the runner can "Take 1 tag TO bypass", so it is an effect with a cost. The rules state that if there is an effect with a cost, the cost must be paid to gain the effect. With Raven, there is no effect with a cost; it is simply an effect and can therefore be avoided. — PureFlight 26 Jul 2017
This also combos well with Mr. Stone, for extra taxing. Take a tag AND meat damage, or avoid both and spend credits. — Drakeheart 28 Sep 2017
3

If tagging the runner is an essential part of your gameplan, or you're in Reality+, this is a very cost-effective ice. It usually cause a 3-4 credit swing, which is great for a 2-cost ice. If you're in Reality+, this is one of the most cost-effective ices to raise the costs on trashing a non-essential asset. E.g. if you install an Authenticator on a Rashida turn 1, they could take a tag to bypass, but that adds something like a click and a 4-credit swing to trashing Rashida.

Authenticator doesn't solve all of the problems that Funhouse has -- when a runner has already decided to go tag-me, this ice doesn't do anything but add a tenth tag and won't stop their desperate scramble to steal the last agenda. BUT it only costs $2 and it has much more early value than Funhouse does. It doesn't take a tempo hit to rez Authenticator.