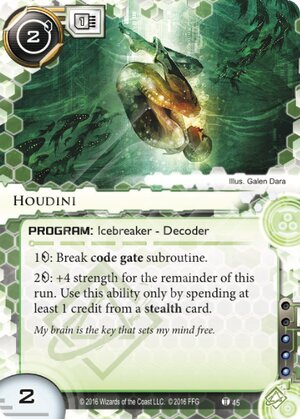 2credit: +4 strength for the remainder of this run. Use this ability only by spending at least 1 credit from a stealth card.

My brain is the key that sets my mind free.
Illustrated by Galen Dara
Decklists with this card

Refractor made better or not ? Let's compare...

So it's only better than Refractor in some corner cases : in a meta full of 3+ strength code gates, or where DNA Tracker and Archangel are heavily expected.

A note on which Runner can use it at best :

So have I answered to the question I asked in the first sentence of this review ? Well, let's consider the illustration : Houdini, definitively !

(Escalation era)
Lupus Yonderboi 234
i would argue that houdini fits much better lorewise with kit. the flavor text is something a transhumanist would say. — TKO 14 Oct 2016
@TKO : I didn't pay attention to that. After reading it, I was wondering if it wasn't some lyrics of an Arcade Fire song or something, but a Google search says it's (almost) a quotation from Harry Houdini :) — Lupus Yonderboi 14 Oct 2016
Smoke's theme is magic and both this and Blackstone are named after famous magicians. The flavour text is actually Houdini's mantra. — CrashT 4 Nov 2016
Funny that not only are they named after magicians but specifically magicians named Harry. — staglore 11 Nov 2016
I predict that the next killer for shapers will be named 'Dante' after Harry August Jansen's moniker. — staglore 11 Nov 2016
Missed one very important interaction in Enigma. Cost's Houdini 2 cred no stealth to break and Refractor 1 stealth + 2 creds. Enigma is an extremely common cheap early gear check with some bite to it. It's fairly close between Houdini/Refractor in my opinion but Houdini wins in the current meta. On know the meta last 3 aggregated Archangel is the most common codegate with Enigma 4th and Crick 8th whilst neutral Pop up window/essentially neutral Quandry are 2nd/5th. In refractors favour is Tollbooth 3rd, Turing 5th, Lotus field 6th and little engine 8th. Worth noting that Turing/Lotus/Engine combined are less likely to be seen than Enigma nevermind Archangel. Couple this with the fact that efficiency against Enigma involving no need for a stealth credit is much more important in terms of early pressure/tempo than any other efficency. All the common refractor strong ice are relatively expensive rezzes compared to the neutrals and crick/enigma. Regardless Turing can be clicked through and stealth has a great match up vs HB. Little Engine is going to be disgarded against Smoke/Kit everytime or you just laugh paying two stealth to gain 1 credit after they paid 5 to rez is not bad especially as no high strength codegates can be stacked on that server verus houdini. — macydus2 23 Nov 2016
@macydus2 : no, Enigma doesn't cost stealth credit to Refractor. — Lupus Yonderboi 9 Dec 2016