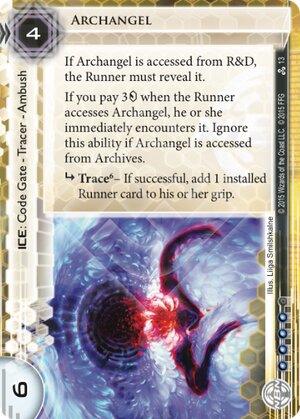 If Archangel is accessed from R&D, the Runner must reveal it.

If you pay 3credit when the Runner accesses Archangel, he or she immediately encounters it. Ignore this ability if Archangel is accessed from Archives.

subroutine Trace [6]– If successful, add 1 installed Runner card to his or her grip.

Be a little careful rezzing this card against Noise: Hacker Extraordinaire, especially on R&D. There is no 'may' clause to the sub, which means the corp has to return an installed card, even if you've bounced his entire rig except for his last Cache.

Hopefully I never make this mistake again, as I was milled hard while my opponent giggled and set up a pile of credits while continuing to access and mill. Did I mention how he milled me constantly? He wanted to make sure I didn't draw another IE to replace this guy with.

It wasn't worth it to bounce a Medium.

Otherwise this card has saved my bacon on many occasions and is a powerful run deterrent to most runners. But screw Nosie.

(Data and Destiny era)
bubbathegoat 595
I had an opponent do the same thing to me with Sherlock 1.0, back when I was still trying to make that card work. Even better, it was an imp that was recurred and they kept hitting my HQ through Sherlock. I lost that game very quickly. — TheBytemaster 9 Dec 2015
I just won a game recently because I was able to run on this card, force the Corp to bounce my D4v1d, and reinstall for a whole new set of counters. — behr83 25 Jan 2016
Screw Noise! — quailman2101 24 Mar 2016
4

This is a very taxing card for the runner indeed. If the subroutine is not broken then they would suffer a major tempo hit, potentially losing an expensive card back to hand.

It also offers NBN a relatively cheap, efficient and taxing piece of ice to add to its repertoire. Rush and kill decks both would benefit from its inclusion.

However, it is a weak early game piece of ice because the runner could be running without any cards in play, thereby nullifying its impact. So if it is installed early, do not rez it until its subroutine will do some major tempo damage.

Regarding the R&D access option, consider the cost/benefit of activating the ice in relation to the current credit differential between yourself and the runner. It would cost you 3 credits to activate it, but the cost to the runner could be much more than this. However, the rez cost is just 4 credits once on the table, so many times you may opt not to activate it from R&D.

If you can rez this ice at a point where the runner has a lot of cards installed, and does not have a cheap way of breaking the subroutine, then this card is sure to reap a solid dividend.

As a Prepaid VoicePAD Kate "Mac" McCaffrey: Digital Tinker runner, I really find this ice to be a major problem these days!

(Data and Destiny era)
Hayati 50
I think the most obvious choice for triggering the ambush would be on deep Medium digs on RnD. Unless they have a loaded Kati or some other really sweet looking target, it's probably best to just install and rez. Still, ambush ice is an interesting design space. I hope there is more to come. Also, does anyone know what happens when you bounce a Film Critic with a hosted agenda? — WayneMcPain 19 Nov 2015
The agenda would go into Archives. — BaronZilar 19 Nov 2015
2

The obvious uses are:

The trick I've missed so far is to just hold an Archangel in hand. If you can afford to trigger it multiple times, it can be a major annoyance for the runner. This is especially useful if HQ isn't very secure, inviting friendly runners for multiple visits. As an Ambush it is very difficult to trash. Typically an Imp or similar would be required. Using Archangel like this is relatively costly, but can generate a differential.

I can't believe how cheap Archangel is to rez.

(Kala Ghoda era)
Quicksilver 87
I'll echo your last line. 99% of ice costs one more to rez than it does to break with Corroder/Gordian/Garrote. That's just kind of the rule. Ice that is better than that typically doesn't stop the run, or can be clicked through, or something. Archangel costs 4 to rez, and 5 to break with Garrote. That's insane. You can see what's going on. Its basically costed as positional ice. You can see similar cost efficiencies on other code gates that don't do anything on their own. Chum/Wendigo, etc. Archangel is better though, because of its permanent impact on the runner's board state. Every time someone Power Tap rabbit hole Nexuses through one of these an angel gets its wings. — Waltzard 29 Jan 2016
Archangel is Code Gate and Garrote is Killer. — alex_monk 29 Jan 2016
But it still costs 5 to break with Gordian Blade as well for those counting. — Goldstep 30 Jan 2016
This card absolutely wrecks OCA builds, since Fall Guy won't save a resource from being added to their grip and it won't save anything hosted on OCA because their host is no longer available. Any OCA build needs to respect any NBN deck on 3-4 credits if you aren't also filthy rich. — Sabin76 2 Feb 2016
I agree with Waltzard. This card is just too powerful for its cost. 5 to break with Gordian Blade! It pays for itself in one encounter. You got to be careful early game as they may run through it with nothing installed, but that'll last exactly one turn. Just put an Ice Wall in front of it and problem solved. There are only 3 economical ways past it, D4vid, Femme, and Study Guide. D4vid of course has only 3 uses. Even if the runner Femmes it, it's no big lose for the corp, they only spent 4 to rez it and it'll quickly pay for itself. Study Guide is great, breaking it for 1, but that's only after spending 3 to install it and 12 to get it up to strength. Even Refractor needs 2 stealth credits and credit. Then too the ice has the ambush option. I don't think it'll often be used, but its an option and a really good one in certain circumstances. Anyway, I don't like this card! — quailman2101 24 Mar 2016
1

This does seem like a direct response to the popular combo with Off-Campus Apartment, Fall Guy and Wireless Net Pavilion, since add card to grip completely bypasses the trash effects otherwise preventing you from trashing those resources.