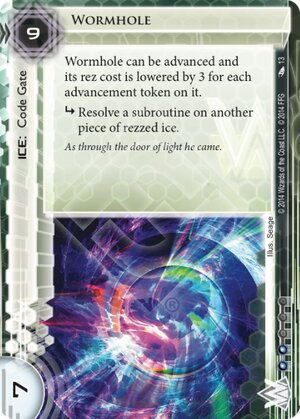 Wormhole can be advanced and its rez cost is lowered by 3 for each advancement token on it.

subroutine Resolve a subroutine on another piece of rezzed ice.

As through the door of light he came.
Illustrated by Seage
Decklists with this card

This, in my opinion, is the strongest of the space ice, and probably the most interesting code gate in the game. It's not quite as straight-up taxing as Tollbooth, although it's close (one less when encountered with the standard Shaper decoders, 3 less with D4V1D). However, in place of your boring etr subroutine, you have the most magnificent subroutine on a piece of ice in the game: the ability to resolve ANY other subroutine. "It's cool in theory," you say "but, really, you will end the run 95% of the time." FINE! End the run, if that's the strongest play. But, what if you have a destroyer rezzed? Or AP ice? Or Architect? Or NEXT Gold?! The ability to choose what happens from so many things, on a strong piece of ICE that is likely to hit, while still being able to end the run, is just great. This is auto-include for 1 or 2 in every Weyland deck, IMO. It shines, like all of the space ICE, in Blue Sun because of the OAI synergy, but the advance ability also makes it viable for less economically powerful IDs, and other factions (though a piece of ICE sitting with 3 advancement counters on it is a bit of a giveaway).

Wormhole has one major drawback: You need other non-wormhole ICE rezzed or it does absolutely nothing, so it's not that strong early game as a first-rez. But no 9 rez ICE is going to be ideal for your first piece on a central server.

(Breaker Bay era)
mrdudesir 629
I agree. The other ID that I would love to put this in is Tennin Institute: The Secrets Within: cheap rez, great holder for counters for Trick of Light, and bluffable as Ice Wall. Its biggest strength is generally with a destroyer, though. — EnderA 15 Aug 2015
How would this work with the Jinteki ICE: Kitsune? i.e. they run into wormhole, i have a rezzed Kitsune (mayhaps they previously broke it with Overmind or something), I copy Kitsune's subroutine with Wormhole. Does this trash the Wormhole after it resolves? Or does it trash the Kitsune? Or does neither trash because the Wormhole is resolving a self-referential ability (and it is not 'that' self)? — Orgodemir2 28 Dec 2015
It trashes Kitsune. — AV8R 15 Feb 2017
3

This card can give you incredible mileage in Jinteki: Replicating Perfection or Industrial Genomics: Growing Solutions.

Firstly it lets you stack advancement tokens, this means it can be a target for Space Camp and Trick of Light. Inside Weyland it can also benefit from Shipment from Kaguya, Hollywood Renovation or any of the other cheesy Weyland cards that allow/help you advance Ice.

Secondly it lets you use any subroutine, this is great because some of the best ice for these Jinteki decks are Excalibur or Susanoo-No-Mikoto which are both Uniques. Furthermore it can be used to fire net damage subroutines such as Neural Katana or trash a program routines from other Ice like Ichi 1.0, Grim or Swordsman. It also fills in a big gap in Jinteki ice - it can also let you end the run. Remember Wormhole lets you fire off strong subroutines that have the misfortune of sitting on low strength Ice or Ice that don't often get encountered, so don't forget Architect or Crick. An even weirder possibility is to use it to trash hardware by combining it with Taurus or using it to 'refire' failed traps like Whirlpool.

Another benefit of this ice compared to staples such as Komainu is that it is not vulnerable to Parasite.

Strengths: With a full 3 advancement tokens on it (or even just 2) it is not particularly vulnerable to derez abilities such as Emergency Shutdown or Crescentus. Since the surprise factor will likely be low in any case you could also rez it early with Executive Boot Camp against DDoS/Blackmail style decks. It will cost Cyber-Cypher 4 to break, Gordian Blade or Eater 6 to break and Faust a whopping 4 cards as well. It will also stop Endless Hunger in its tracks, since it is not an ETR subroutine... even though you can use it to ETR. For added hilarity you can even land some borrowed brain damage from a lowly Viktor 1.0

Weaknesses: Wormhole can be a Femme Fatale target, it can be broken for 1 counter with D4v1d and it can also be broken with Knight. Once you advance it, it will also be the first piece of ice that gets bounced by Leela Patel: Trained Pragmatist's ability.

The cost could also be considered a weakness, since it costs a combination of 9 or 3 advancement tokens to rez it. It's worth noting that it loses one of the big benefits of Ice by telegraphing itself as an advancable, although it can make up for it in flexibility.

Lastly Wormhole is completely worthless if you don't have any other Ice rezzed, so you will need to support it by playing other Ice with useful subroutines.

Janky Combos: I don't recommend trying for this sort of thing but you could try and combine it with Inazuma, Sensei, Marker, TL;DR, Flare, Shinobi, Bullfrog or even Cell Portal. Marcus Batty is a more reasonable and realistically landable combo which can potentially do some damage as well.

(Business First era)
Zakalwe 479
Spoon makes this ICE very sad. Especially Spoon + D4vid. — Shieldwall 14 Mar 2016
If they land the Spoon in the same turn yes I will not get much out of it, but usually I will use Trick of Light to fast advance with the advancement counters after rezzing (or before rezzing, never waste a chance to score!). In IG I've got Museum of History it so that we may be reunited once again. Multiple Hostile Infrastructures make ice destruction very sad. Sadly D4v1d is a fact of life that can only be dealt with by wearing down its counters or program destruction. — Zakalwe 17 Mar 2016
0

TL;DR into Wormhole with another Wormhole and a Caduceus rezzed on the board. Infinite money loop for you and your friends. Wile away the infinite time loop by thinking about your mom, picturing different animals, and practising your frisbee wirst flick technique. The game ends when the runner leaves.

(The Universe of Tomorrow era)
formerteen 1141
How does this work? TLDR is on encounter. — StashAugustine 16 Oct 2015
I think he's trying to loop the added sub on the first Wormhole back around to the first via the second Wormhole but it still seems it would resolve the looping when you hit the Caduceus trace for a second time. I'm gonna say this doesn't work until someone explains it better. — FarCryFromHuman 17 Oct 2015
Correct. Labeling Wormhole 1 subs as W1a and W1b, Wormhole 2 sub W2a, and Caduceus money as Ca, @formerteen's idea is that by going W1a -> Ca, W1b -> W2a -> W1a -> Ca, somehow W1a becomes the last sub triggered putting W1b as next. Unfortunately, the second trigger of Ca resolves W1b, meaning W1 is passed. You can loop subs all you want, but once the final result is obtained the parent sub is considered resolved. With both subs resolved, the run continues past W1. — Riconosuave 17 Oct 2015
I like using it in Tennin in combination with Susanoo-No-Mikoto. Since Su-Soo is unique, you can only have one rezzed on the board, but Wormhole effectively gives you a second one, which can be very powerful if you're dedicated to deflecting the runner into archives. — Bigguyforyou518 17 Oct 2015
Now Bigguy's comment is completely valid. It's also extremely powerful to have Wormhole on any server with a Marcus Batty. Trigger Wormhole with Batty, and then pick any subroutine on your board to resolve. — FarCryFromHuman 17 Oct 2015
Whirlpool would be needed to cause the runner to be unable to jack out. TL;DR into Wormhole gives it two subs; you use one for caduceus and the other for the 2nd Wormhole. The 2nd Wormhole allows you to retarget TL;DR, but the runner could chose to jack out at that point. — aero 17 Oct 2015
@aero, just because you use a second wormhole to target TL;DR doesn't mean the run continues from TL;DR. 1st Wormhole 2nd sub to 2nd Wormhole to TL;DR would cause the run to continue past the 1st Wormhole, as both subs have been completed. The only way to move a position on a run is through specific card effects, such as Cell Portal. — Riconosuave 17 Oct 2015
Well this could be an eternal tag and money loop: Bullfrog, Caduceus and Universal Connectivity Fee rezzed on the board Runner runs on a server with: Whirlpool - The Runner can not jack out Gutenberg - Out trace the runner for a tag. TL;DR - Gives Wormhole two subroutines Wormhole -1) Resolve UCF first loop and the Caduceus 1st -2) Resolve Bullfrog and bet 1 This should do the trick. — rhoddry 18 Dec 2015