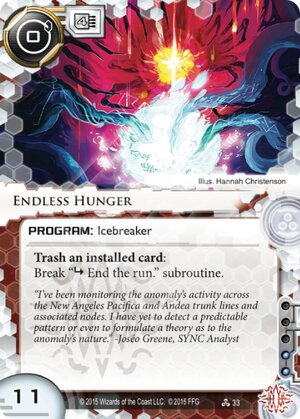 "I've been monitoring the anomaly's activity across the New Angeles Pacifica and Andea trunk lines and associated nodes. I have yet to detect a predictable pattern or even to formulate a theory as to the anomaly's nature." -Joséo Greene, SYNC Analyst
Illustrated by Hannah Christenson
Decklists with this card

Since Endless Hunger only breaks subs that say exactly " End the run.", with no other clauses, there are still plenty of (often overlooked) ICE that can put a stop to your fun.

Here's a search list that (as of Data and Destiny) shows all the ice that will end your run that Endless Hunger can't get you past:

You also need to watch out for Orion and Wormhole.

They come in a few categories:

50% are Sentries, making it clear that a backup Sentry breaker is a really really good idea, and e3 Feedback Implants are a sentient virus' best friend.

@Krams notes below that Inazuma, Susanoo-No-Mikoto, Wendigo and Bullolfrog are also things to watch out for.

(Data and Destiny era)
Vaslav 11
Actually, Orion is not something you have to watch out for, due to its 3rd subroutine if you have an e3 on the table. And let's be honest here, if you're not running e3 with Apex, you're doing it wrong. Psi-game ICE, the tag based ICE, Ravens and Booths (although Hunting Grounds laughs at both of those), Pop-up Windows and Turing all give EH headaches...but ultimately are not necessarily "game-ending", per se. Wormhole is also a huge pain, but D4v1d takes care of that one. Not disputing your point...by itself, EH does have many adversaries...but with e3 and minor backup breakers, it really doesn't fear very much at all. — esutter479 5 Nov 2015
Another honorable mention would be a Hadrian's Wall with 5 advancement tokens (or an Ice Wall with 11, lol) on it since is also impassable by EH. — utilael 5 Nov 2015
Yeah, along with a Sentry breaker, e3 is going to be pretty mandatory for Apex Hunger builds. In addition to Orion it also gets you past Datapike and Heimdall 2.0. And D4vid for Wormhole, Wotan and advanced Walls. — Vaslav 5 Nov 2015
Question about Endless Hunger + e3: since subroutines are resolved one at a time in order, wouldn't the subroutine(s) that you break with e3 have to be listed after the ETR subroutine(s) you break with Endless Hunger? — forktines 5 Nov 2015
No, you can BREAK subroutines in any order you want. Order only matters when firing unbroken subroutines. — Sabin76 6 Nov 2015
@Vaslav: Thank you for that useful list. Other honorable mentions are Inazuma or Wendigo if played directly in front of an ICE with a standard ETR sub or Deflectors like Bullfrog and Susanoo-No-Mikoto. Any of these can easily be passed and destroyed with Prey except Susanoo - you will need D4v1d or a killer to pass him. — Krams 6 Nov 2015
Rather than using a sentry breaker, you could use Gingerbread to beat tracers. It stops Resistor and Viper, but not Troll or Tsurugi (for ETR ice). You won't get protection from other sentries like Grim, but it's cheaper to install and more efficient than other sentry breakers out there. — yang573 7 Nov 2015
Patched Curtain Wall is probably the only reasonable piece of ICE that will clock in at 12 or more strength. Better break out that Dinosaurus! — LordRandomness 2 Feb 2016
In the Mumbad cycle some more ICE were released that could end a run without being Hunger+e3 targets. Vikram 1.0 works for the same reason as Wendigo. Ravana 1.0 and Upayoga both work for the same reason as Wormhole. — Krams 27 Jul 2016
4

The new Deva Icebreakers (Aghora, Vamadeva and Sadyojata) are a strong addition to Endless Hunger's toolbox. All three are available and slot nicely with Heartbeat's 1 as the 'secondary breaker'. Even better only one of them will be turned facedown by Apocalypse

Using them in concert with Hunting Grounds, e3 Feedback Implants and Heartbeat there are only 4 pieces of ICE in the game (up to Salsette Island) that cannot be broken or walked through: Caduceus, Pachinko, Viper and Upayoga (if combined with some form of Psi ICE or Mother Goddess with End the Run). Caduceus and Viper are trace effects that can be paid through. Pachinko only works if the runner is tagged (since Data Raven's encounter effect can be defeated by Hunting Grounds there's no reliable in-run method for tagging. Upayoga combined with Bullfrog, Snowflake, Clairvoyant Monitor or Mother Goddess can potentially lock off a server however.

Turing can be walked through for . Once it is passed it can be trashed using Prey for 2 cards if it is installed on a central server.

The other problem this set-up may encounter is Swordsman trashing one of the Devas.

Perhaps the best solution to all of these tricky pieces of ICE may be using Always Be Running combined with e3 Implants. Use this in conjunction with Prey to inconvenient ICE and the world will be yours*.

(Salsette Island era)
Zakalwe 479
Prey doesn't need subs to be broken. It works when ICE is passed, for whatever reason. Remote Turing is still 5 cards to trash though. — enk 6 May 2016
Thanks enk, updating the review now. — Zakalwe 6 May 2016

If you would use Akamatsu Mem Chip for MU, only ices that can end the run and can´t be broken with breaker suite Endless Hunger+devas+Gingerbread+Flip Switch (for Data Ward and Pachinko if you are tagged) are now only Loot Box, triple-advanced Mausolus, Meridian, Peeping Tom and Turing (Vamadeva is AI)