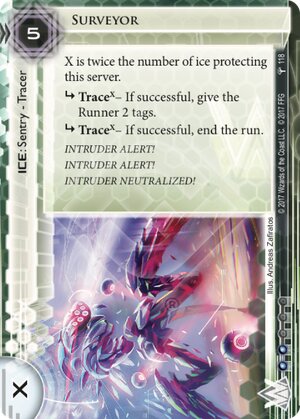 X is twice the number of ice protecting this server.

subroutineTrace [X]– If successful, give the Runner 2 tags.

Anyone who’s played Caduceus enough can tell you full well how often an unpumped trace-2 ETR subroutine is unsuccessful if fired. Given that nowadays, many runners are packing link due to dangerous threats like Exhibit A or Exhibit B, that trace-2 ETR can end up costing the corp a lot more than they paid for. However, anyone who’s ever played Resistor can tell you how often their trace-4 ETR subroutine is successful (if not broken) and how valuable it is at a great rez cost.

My point is that Surveyor is valuable as soon as soon as you can get X = 4 (making Surveyor have ICE/trace strength of 4). This is because it immediately makes the (arguably) top 4 killers in the game very, very sad:

• Out-of-range for Mimic without support

This is pretty good at a 5 rez cost and letting both subs fire can be expensive to pay through (Power Tap builds aside) or game-ending. There is a catch, however – Surveyor needs support from an additional piece of ICE to get X = 4. Which makes Surveyor quite difficult to play early game since it’s got a huge upfront of having an additional ICE installed + its own rez cost of 5. The immediate synergy that comes to mind is pairing this bad boy with Jinja City Grid or other installation-support cards.

• MKUltra is in the same bin as Mongoose since it only pumps cleanly to odd-number strengths. It’ll require X/2 pumps to get past Surveyor and that really gets out of hand as soon as X = 6 or more

Cards like Surveyor are the finale in the Kitara cycle's plan to rejuvenate the Glacier archetype (although ICE destruction being back is a thing so maybe not). It's also an easy target to splash into other Glacier builds at its 2-influence cost. A good face-check ICE, a better taxer as soon as you can make X >= 4 but one that should not be used for more rush-based play. Just don't let Security check on Surveyor.

(Kampala Ascendent era)
BlackCherries 350
I may be misremembering, but didn't the recent interview with Damon make clear that he is responsible for everything until the end of this cycle? Meaning Boggs had nothing to do with this... — Sabin76 7 Jun 2018
I’m not sure about your understanding of the X. X = [number of ice] x 2. So Surveyor’s X is 2 by default, and an additional piece of ice on the server would make its X = 4. I’m pretty sure everywhere you said “X = 2” (“Surveyor needs support fromyou mean X = 4 — maxheel 14 Jun 2018
Accidentally hit post before finished editing :\ — maxheel 14 Jun 2018
Ah good point. Will edit. — BlackCherries 14 Jun 2018
4

One of the only ices in the game which is both a fierce facecheck and wildly efficient. It has no bad matchups* and in glacierish decks it is almost always useful.

Pairs well with ANY other ice and generates unusual amounts of value out of cheap ice installations.

*Except Tao (3% of runner decks) and Smoke (9%). In addition, a few runners have a base link which makes Surveyor less valuable early. But... if you're using Surveyor, you're probably pretty well-stocked on cheap ice, so you should have early options.