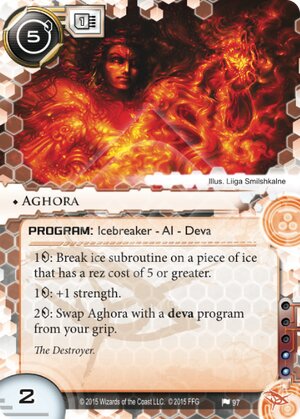 Interface → 1credit: Break 1 subroutine on a piece of ice that has a rez cost of 5 or greater.

2credit: Swap this program with a deva program from your grip.

The Destroyer.
Illustrated by Liiga Smilshkalne
Decklists with this card

This is the card I've been looking forward to all cycle! I'm a big fan of interesting rig setups with multiple moving pieces. I took Streetchess to almost every tournament until MWL butchered my deck, -4 influence is rough :/

This card lets me bring a new interesting version of Chess due to it's synergy with Rook!

This lets you break everything with a base rez cost of 2+ with Aghora. Mostly it'll be used to break rez cost 2-5 stuff I imagine but with datasucker (or ice carver hear me out. You can take down bigger stuff. Now the reason I even bring up Ice Carver is because you'll mostly want to parasite rez cost 0-1 Ice which mostly has Str 0-2, at least in my meta and it will trim MU requirement slightly and free up influence but I'd have to do some testing when I get the pack.

Considering how surprised I was with the effectiveness of a Brahman, D4v1d, Chameleon rig (in hailey). I could run through Heimdal 2.0, Viktor 2.0 and Ichi 2.0 over R&D almost every turn for 6-7 turns until I won thanks to the combo with Technical Writer. I have high hopes for this card at least when it comes to Tier 2 decks.

(Fear the Masses era)
Yziel 128
Sounds fun, I just worry about Magnet. I think it'll be used quite a bit, at least for the next while. — quailman2101 20 Jun 2016
rook on magnet's server is broken with aghora just fine. — Rek 13 Aug 2016
or not. derp — Rek 13 Aug 2016
I think aghora is good even without using cards like xanadu and rook as it breaks pretty much all the scary ICE that are too big for mimic. If you had this and mimic out then you could check most ICE safely and do the usual parasite deja vu shenanigans with any of the small barriers and code gates that fall through the net. — DGB123 30 Sep 2016
3

Aghora does well in a Chameleon+LLDS deck, or when paired with cheap/specialized breakers like Inti, Yog, and Femme. It's useful against most of the higher-strength ice that these breakers struggle with, but it falls short of being a top-shelf solution because there will always be a few ice that fall between the cracks and can't be broken by either the standard breaker or the deva. It's a solid choice in casual games for certain deck types but I don't think it has the legs to be an all-around winner.