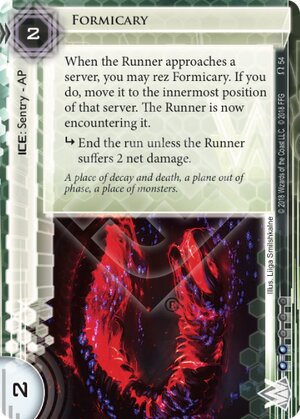 When the Runner approaches a server, you may rez Formicary. If you do, move it to the innermost position of that server. The Runner is now encountering it.

subroutine End the run unless the Runner suffers 2 net damage.

A place of decay and death, a plane out of phase, a place of monsters.
Illustrated by Liiga Smilshkalne
Decklists with this card

Formicary is a good Weyland sentry. It's no Archer, Surveyor, or Colossus, but it is a cheap sentry you can slap down on your remote and then have magically defend your centrals when you need it to. Its sub isn't the greatest in the world, it lets the Runner pick their poison after all, and its rez-to-break ratio isn't all that great either, but it's effect is punishing enough that Runners would rather just end the run if they facecheck it and its effect practically begs the Runner to facecheck it when they least expect it to. I think 2 creds for it is a steal, honestly. Also, Formicary was the central part of a hilariously degenerate combo that led to the first banned NISEI card.

So that was the reason Cayambe grid was banned!

How does it interact with Boomerang? If Boomerang targets it unrezzed in server 1 for example, when it's rezzed & relocated, does Boomerang follow? Thanks!

Boomerang makes no statement regarding the position of the ice, just that an ice is declared. Once declared, Boomerang keeps track of the declared ice so long as it stays on the board. This means that Boomerang follows even when that piece of ice is moved or derezzed (but not if it is somehow reinstalled).