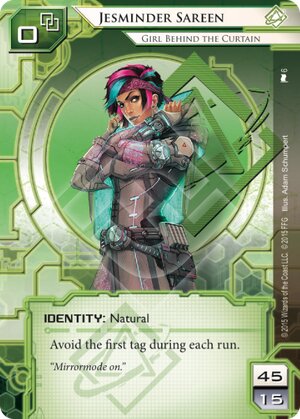 Jesminder Sareen: Girl Behind the Curtain

interrupt → The first time each run you would take 1 or more tags, prevent 1 tag.

"Mirrormode on."
Illustrated by Adam Schumpert
Decklists with this card

My first impression when reading this card was that it will certainly be very helpful vs ice like Gutenberg and Data Raven. Both are popular pieces of ice and quite annoying to deal with while playing as the runner, especially if the corp is running a few QPMs. But what else is it good for? After all you don't run into those pieces of ice every game, even most games. After thinking about it, I realized there are quite a few advantages and synergies to this id.

-The first comes in the form of the next card in the data pack. Maya is a pretty cool console. Being able to put that pesky operation you just accessed on the bottom of R&D, keeping it out of corp HQ and allowing another access if you run again is a pretty decent ability. Taking a tag each time you do it probably overshadows the benefits, but no worries if you are playing as Jesminder.

-Vamp: If you got the credits Vamp can be a game changing card. One advantage is that taking all the corps credits lets you access advanced cards with far less fear of repercussions. Especially as the only free advancement ambush I can think of gives tags!

-Code Siphon: This is an interesting card. One that is a bit hard to use in my opinion. And because it gives a tag, I could never justify including it in the past. I don't believe I've ever seen anyone play it against me either. But I can see it being a standard include in Jesminder decks.

-Snare: Ever hit a snare with only one click to spare? I have many times and I've had to decide whether to pick up a card or remove the tag. Do they have a couple Neural EMPs in hand or a Scorched Earth? I've definately guessed wrong on that front in the past. Jesminder removes some of the sting from this powerful ambush.

-TGTBT: Not a very popular agenda but you might see it sometimes.

-Ghost Branch won't effect you unless its got 2 or more tokens on it.

-News Team is easier to deal with. It stinks taking a negative point. Now its not too taxing to take the tags instead.

So those are some notable interactions I could think of. It's great that her ability is active each run, not just once per turn. It definitely seems to be a solid ID to me.

As beladee mentioned, this is an excellent id to be running if you happen to be playing against Argus Security. Also, this id makes cards like Rachel Beckman and Zona Sul Shipping safer to use (though I would still never use either against NBN).

I think Jesminder is a runner for a future meta. As cards cycle in and out, we will see the nature of the game change. Tags have already started to see use, not as a way to kill the runner, but as a currency the corp can spend with cards like Keegan Lane, Lily Lockwell and others that put them so far ahead that killing isn't really needed.

Suddenly, Jesminder is Keegan Lane's arch nemesis (and god-damnit I will ship it).

On top of that, she has obvious synergies with her own console Maya which will lead to some interesting plays. Stick all the agendas to the bottom then do a big Showing Off/Medium/R&D Interface for style points?

(Kala Ghoda era)
LeaPlath 36
Pretty sure there are very few situations in which you'd put an accessed agenda on the bottom of the deck rather than score it... — pulsemeat 6 Feb 2016
Yeah, you do access it, so you'd have to steal it, unless it's a NAPD Contract or other agenda with an additional cost. — quailman2101 6 Feb 2016
And most corp decks are using Jackson Howard so you would have to be quick — diehardlurch 23 Feb 2016
2

I think time showed that if you want to play agreesive Account Siphon decks you want to combo them with ICE destruction and strong AI to break any resistance in the early game. So, Anarchs that is. Or Criminals if you still believe in derezzing things. Simply put, that one tag to clear is simply not enough to validate building deck around Jesminder.

I tried, I failed badly. If you really want to play those shaper Vamp decks, just play Kate "Mac" McCaffrey: Digital Tinker for some discount or Chaos Theory: Wünderkind for faster setup.

We live in heavy tag time, NBN: Controlling the Message worded especially to neuter poor Jess, SYNC: Everything, Everywhere tagging outside the runner's turn and BOOM! her out from the board, but there is one way to make her playable.

Find one influence in your Kate "Mac" McCaffrey: Digital Tinker or even Hayley Kaplan: Universal Scholar deck, include New Angeles City Hall and Film Critic because 24/7 News Cycle is a thing, and in some matchups just rebirth into Jessminder Saren and laugh at all those Data Raven, Gutenberg or Datapike.

In certain matchups she is as good Rebirth target as Rielle "Kit" Peddler: Transhuman is in another. Have fun, but just don't try to make Account Siphon decks around her. There are so many ID out there doing it better.

Most of us think of the defensive side of her ability.

But think of it's offensive possibilities as well!

Maya is neither the only, nor the best option to use Jesminder's ability: Rachel Beckman and Joshua B. will turn her into a 5 click runner without any drawback.

*Edit: as noted in the comments, it doesn't work with Joshua B.. But I guess it goes well with Security Nexus cancelling effectively it's main drawback.

(Kala Ghoda era)
Absolium 73
I don't think it comboes with Joshua B as his tag is at the end of the turn and Jesminder's skill is to avoid only after every *run*. — cartesius 3 Feb 2016
Not even after a run, but only DURING each run, which definitively puts Joshua B. out of range of her ability. She still helps keep Rachel Beckman on the table in the case of Data Raven, Gutenberg, etc. — slobad31 3 Feb 2016
Good point, my bad. — Absolium 3 Feb 2016