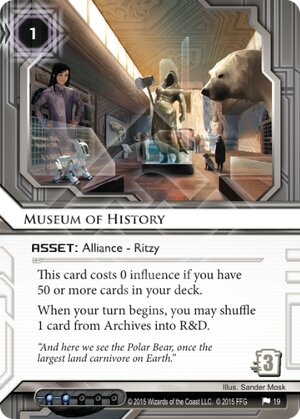 This card costs 0 influence if you have 50 or more cards in your deck.

When your turn begins, you may shuffle 1 card from Archives into R&D.

"And here we see the Polar Bear, once the largest land carnivore on Earth."
Illustrated by Sander Mosk
Decklists with this card

This card has a fairly narrow use, but man can it be powerful in the right deck. This card's most obviously useful in decks like Industrial Genomics: Growing Solutions and Gagarin Deep Space: Expanding the Horizon where recursion of assets and archive control is useful.

But this card has some other powerful side effects as well. It's not just getting back your cards, it's that you're able to shuffle your R&D each turn. This can make cards like Medium, Indexing and other R&D lock mechanisms much less effective. Additionally, because this is neither unique nor expensive, it's not impossible to get a situation going where you are putting three cards back into your R&D every turn, reducing Agenda density substantially.

I can easily see this being the first in a series of cards that encourages and powers larger sized decks. Fun stuff!

(Kala Ghoda era)
connorhalo 141
Well, it makes Medium much MORE effective, since every turn runner can check X new cards from top of the R&D server. — konradh 31 Jan 2016
#konradh I'm not sure about that, actually. I'm no math major and I could be wrong, but if you're digging into R&D, you steal agendas and leave the non agendas (for the most part). That means the more runs you make, the deeper you go, the moren likely you are to see an agenda. If you shuffle each turn, you are re-setting those odds. It doesn't increase the number of cards seen but it resets the agenda density. I may be totally off on this though. Maybe a good question for someone with a math degree :-) — connorhalo 3 Feb 2016
It depends on what your goal is. If your concern is how easily they'll access agendas and they're accessing more than just the top card, then shuffling is bad for you because it refreshes ALL of the cards they're getting to see. If you're trying to avoid them knowing what you draw, then shuffling is good for surprises. The slow lowering of agenda density doesn't really do much. — EnderA 6 Feb 2016
Assume that the runner has a medium on 3 and they run and show 3 ice. A shuffle will trade off 3 known to not be agenda cards for 3 possibly agenda cards. Adding cards back in that are non-agenda adds some tiny % likelihood that a possible-agenda is less likely to be an actual-agenda. Trading known-non-agendas for possibly-agendas adds a huge % to the likelihood the runner gets a successful score, roughly 20% per card. It's orders of magnitude better for the runner in the scenario I described. — Raiddinn 18 May 2016
1

The first thing I thought of when reading this card, and I'm surprised no one else has mentioned it yet, is that it would be quite helpful vs Noise. There are far too few cards that fit that description in my opinion. Off the top of my head, I'd say a virus spamming Noise installs about 1.5 viruses per runner turn. Having one of these in play would greatly reduce the damage of Noise's extremely powerful ability.

There are problems though. First, you need to protect it and protect it well. With Faust in play, Noise can make most runs easily. The trash cost probably won't deter him at all; it's not very high and if course there is Imp to worry about. Also, as mentioned by others, this card makes Medium more dangerous as the runner will access fresh cards each turn. So you'll need to have good protection on R&D too. Lastly, you'll want a larger than normal deck to save on influence. I personally almost never build big decks

IG does seem the best fit for this card. The featured deck this week looks scary! Outside of IG though, I'm not sure it'll see too much play. But you'll be happy you have it if your facing Noise.

So I guess I was wrong. This card is very widely used. It's the new thing to build IG, NEH, Gagarin, Palana, and other decks at 54 cards with 3 of these included. Often with 3 Mumba Temples and either Hostile Infrastructure and/or trash cost boosters. I have to say, since I've been playing mostly as the runner recently, it is getting really annoying, really fast. The new Mumbad City Hall has obvious synergy with this set up. Honestly it seems way too powerful, because Mumbad is free after the 1 rez cost and can be used repeatedly to get all 6 of these cards installed (not to mention any other Alliance cards).

(Kala Ghoda era)
quailman2101 265
I see this card as one to help revive my [Professor](http://netrunnerdb.com/en/card/03029) aspirations. Given the size of any professor deck I have built, this would be a perfect way to make sure the tools you need remain in R&D. — Ihuckdisc 9 Feb 2016
@lhuckdisc wut? This is a Corp card... — WayneMcPain 9 Feb 2016
He's been sniffing Pheromones again. — GrantZilla1979 9 Feb 2016
In addition to being solid against Noise, this card seems like it could be pretty useful when facing an Eater / Kehole or DLR deck. — darkroast 12 Feb 2016
1

2 influence or 50+ cards makes this kind of hard to use, but: if you can protect it, this card makes you immune to R&D lock.

Also: Aibo! And is that Ronan the Accuser in the background?

(Kala Ghoda era)
Vaslav 11
I like to think that the reason the Polar Bear was "once the largest land carnivore on Earth" is not because Polar Bears are extinct, but because someone (possibly Jinteki) has produced even larger carnivores - probably dinosaurs. — Acatalepsy 4 Feb 2016