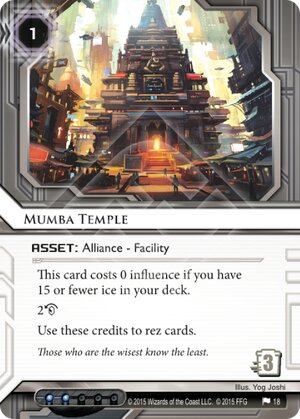 This card costs 0 influence if you have 15 or fewer ice in your deck.

Use these credits to rez cards.

Those who are the wisest know the least.
Illustrated by Yog Joshi
Decklists with this card

When you're measuring the value of economy assets, one of the most important metrics is the break-even time: how many turns does this need to survive to pay off?

Here are some examples. Assuming you rez them at the end of the runner's turn, PAD Campaign and Adonis Campaign both put you one credit down. The next turn, you've recovered the rez cost of the PAD and are 2 up with the Adonis. In contrast, Eve Campaign puts you three credits down, and takes another two turns to over the rez cost. If they don't immediately trash it, Sundew breaks even on the first turn it's out. And so on.

In practice, most economy assets don't pay out unless the runner leaves them alone for at least a turn or two. The cards which do offer positive returns immediately (Mental Health Clinic, Launch Campaign, and Expo Grid) tend to have notable disadvantages: increasing hand size, low trash cost, or an additional trigger requirement.

But then there is Mumba Temple. The very first time you rez it, you're one credit up. No tempo hit, no drawback, no tricky trigger requirement. And then, if it stays rezzed, you effectively get another 2 a turn forever, as you rez ice, assets, and upgrades. You can even use it to reduce the tempo hit on PAD or Adonis Campaigns.

Of course, you have to decide between paying 2 influence for each copy, or capping yourself at 15 ice. Fifteen ice is not quite enough for a heavy glacier build, but for any sort of horizontal deck (Whitetree, NEH, Gagarin) that's more than enough. And honestly, this card is good enough that it's worth 2 influence apiece anyway.

I expect to see this card in most asset-spam decks for the next little bit. Maybe I'll dust off Whizzard again...

(Kala Ghoda era)
tiedyedvortex 4696
Yea this is going to see play in my Gagarin deck, which was only 17 ice to begin with. Might take some tinkering to make it fit properly though, and this isn't an asset you can just play naked and expect to keep. However, with paywall stacked on top of Gagarin's ability, I think we can make it taxing enough for many runners. — mmik 1 Feb 2016