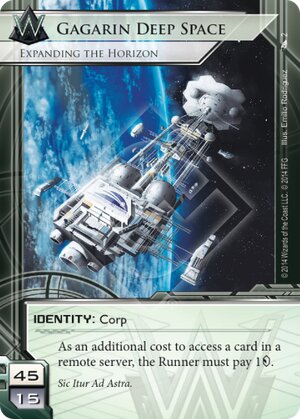 As an additional cost to access a card in the root of a remote server, the Runner must pay 1credit.

Is Gagarin purely janky silliness, or is there a legitimate reason to play it over Blue Sun and Titan Transnational? It can't go big like Blue Sun, and it can't go fast like Titan, but it can tax the living hell out of the runner. Played correctly (with plenty of econ assets to spam on remotes), Gagarin is designed to give you a edge over the runner. For a Corp player, leveraging an economic advantage means:

Gagarin doesn't tax the runner if they don't run on remotes, so to take advantage of the ability, you want central servers that are dangerous or brutally taxing, and remotes that are just barely enticing enough to run on - that means not too much ICE, and assets that are just good enough to be worth running on and trashing.

Some cards that work great with this strategy:

Because the runner always has to pay the tax if they want to access, Gagarin has a minor consolation against anti-asset cards like Whizzard: Master Gamer, Scrubber, and Imp. It can also be situationally useful against Film Critic or Faust decks that run on very lean economy.

I believe this card would break the synergy of protecting Shell Corporation with a trap, as the runner can choose not to access the trap (when additional costs are factored in, the runner can elect not to pay them and not access, right? Like NAPD Contract or Fetal AI?). There aren't many other times where Weyland would play a trap, though, so my guess is that's not too much of a downside.

Seems underpowered compared to the other IDs, but I think that this will improve over time... Taxing is always good. I'm not really sure that this is a "horizontal" ID, although you can play it that way... you can also make it as the "one more cost" to keep checking a scoring server, although that might only been 3-4 credits in a game in existing Weyland archetypes.

Thats why I said this should get better in time - I don't see the archetype that gets more value from this ID then from the Building a Better World existing today, but I can see the design space for it (things like NAPD Contract and Midway Station Grid).

How would this shape up if we had multiple upgrades and the Runner could not afford all of them? Can the runner access the first ones he chooses and not the rest, or does the runner have to go home empty handed?

(All That Remains era)
paulxthompson 236
@nydnarb You're point is valid, however your example/explanation fails to mention that the runner wouldn't even see the Snare if they declined to access, it would stay face-down so the hidden information and trap is still there (unless the Corp player blew it somehow) — zithith 20 Jan 2015
@narcow: You should also mention that the runner can decline to pay additional costs (even if he or she is able to do so) and not access. Look to page 4 of the FAQ under additional costs. Therefore, in your example, the runner starts choosing cards, one at a time. Before accessing each chosen card, the runner either pays 1 credit or doesn't access (runner's choice). It could be the case that the runner refuses to pay the additional costs and accesses nothing. As an example, suppose a facedown Snare! is protecting a rezzed SanSan City Grid, and suppose the runner has 10 credits. There is no ice in front of the server. The runner may run the remote, pay 1 to access the SanSan and trash it, and even though the runner has 4 credits remaining, he can decline to pay the additional cost to access the Snare!. Thusly, he wouldn't access the Snare! Note that the previous example is silly. No one playing Gagarin Deep Space: Expanding the Horizon would make that play exactly because of this funky interaction. But perhaps someone could devise a better example. This example also illustrates the comment of @linuxmaier. — nydnarb 5 Jan 2015
@paulxthompson: The runner accesses the first however many he/she can afford. When a remote server is breached, the runner accesses all cards in that server in whatever order he or she wants. So, say you have a remote with cards A, B, C, D, and E in it. The runner has three credits. She chooses to access C, has to pay a credit. Next, she picks D and pays a credit to access that. Then A, pays a credit. Now the runner has no credits left in her pool. B and E have not been accessed. The runner picks a next card to access, B, but she cannot afford the extra cost, so the card is not accessed. The runner then selects the final card for accessing, but cannot afford to access it, so it is not accessed. The run ends. — narcow 4 Dec 2014