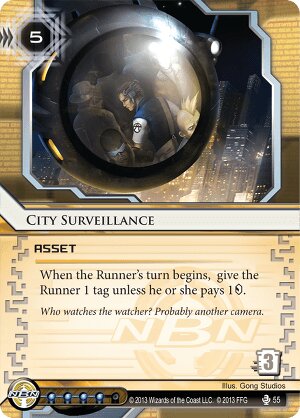 When the Runner's turn begins, give the Runner 1 tag unless he or she pays 1credit.

Who watches the watcher? Probably another camera.
Illustrated by Gong Studios
Decklists with this card

Smile for the Camera!

City Surveillance is a costly asset that hasn't seen much play. At a whopping 5 rez and a reasonable three trash, it almost always gets trashed before it can have much effect. However, this card may be given new light with the recent ID introduced in 23 Seconds:

NBN: Controlling the Message. With controlling the message in play, this makes City Surveillance (and other low-to-mid trash range assets) extremely costly to trash, costing 7 on a linkless runner (or 5 and a click for those who take the tag). Several instances of City Surveillance and a few reasonably priced ICE can ensure that your camera grids are always up, causing a sever drain on the runner's coffers.

Credit drain for the runner (up to 3)

3 trash cost is slightly costly for runners not using Imp or Scrubber.

Extremely Pricey at 5 to rez

Overall, I think this card will begin to see play along with other undervalued NBN assets like Reality Threedee and Franchise City when the new NBN ID comes out . It certainly has a niche role, favoring Taxing decks and those who have many servers with valuable assets.

Rezz timing: essentially the runner's credit pool is a combo. If timed right rezzing City Surveillance when he has no credit in hand can be a devastating tempo hit basically taking away 3 of 4 s for the runner to get rid of the tag.

Keep the runner poor: More often then not the runner will maintain credit to pay the 1 tax, that in itself can make the runner sad, putting a Sure Gamble just out of reach requiring yet more clicks! Spark Agency: Worldswide Reach is an interesting combo that puts a lot of control over the runners credit pool into the hands of the corp (possibly generating income for the corp at the same time) as the corp can rez any number of advertisements throughout the game when most inconvenient for the runner. Taxing ice such as Tollbooth etc can be placed judiciously where the runner needs to run the most.

Punish with tags Late-mid game it is conceivable to have 2-3 City Surveillance installed taxing the runner up to 3s per turn, this would be difficult for many runners to overcome eventually pressuring the runner into eating tags. It's helpful to have some tag-based options to punish the runner, SYNC: Everything, Everywhere is an identity custom made for adding salt into the runner's wound whose been tagged, additionally to possibly finish the game off, cards like Dedicated Response Team which can potentially shut the runner down from running at all, Psychographics to score agendas rapidly or Private Security Force to grind the runners grip down etc, really any number of tag-based options can really make life miserable for the runner if the credit isn't there to defend against them. (Not to mention other methods to tag the runner sooner SEA Source, Breaking News etc)

Anti-trashing: 1-3 rezzed instances of Encryption Protocol can potentially make City Surveillance's affordable 3 cost out of reach making it more likely that all assets stick around and continue to confer their benefits.

Credit denial There is not doubt that City Surveillance can be a integral part of a denial strategy helping to keep the runner poor up to 3 per turn.

Timing: Control of the rez timing can make a significant difference in a game possibly denying the runner momentum.

Tags There also no doubt that getting a tag (or even the threat of getting a tag) can really mess with a runner and possibly open a number of game-ending scenarios in the corps favor.

Costly: At 5, City Surveillance can usually only be guaranteed to affect the runner for one turn, if the runner trashes that first turn, corp loses net 1 (perhaps not so bad if the runner took a tag instead)

Trashable As an asset, City Surveillance with its 3 is a no-brainer for Whizzard: Master Gamer (or perhaps Imp etc). Basically each instance of City Surveillance needs to be in play for at least 2 turns before the corp can see a return on investment.

So for the runner the choice affecting the next turn is, accept the tax, take a tag or trash it now, in either case it's going to cost. Denying the runner credit can be a fun strategy but fraught with risk. City Surveillance can be an integral part of a denial strategy that obviously benefits the corp the sooner it is setup rather than later. A rich runner however may even thank you for putting in City Surveillance instead of using the deck slot for some other card.

(Data and Destiny era)
chris_walker 663
I'd say that timing control is not that much of a help here, as the effect procs when runner's turn begin. It would be much more fun if you could trigger the effect mid-run. I would prefer this card to be 1 to rez and sayting something like "When rezzed, the runner takes a tag. If the runner pays 1, prevent this tag and derez City Surveillance". But I suppose, it would be kinda OP. — Shieldwall 7 Dec 2015
Thanks Shieldwall, The way it's typically used puts more emphasis on credit denial and so it is often rezzed accordingly, bonus if the runner spends all credit in a given turn handing the corp an opportunity to rez to induce a tag, not saying it couldn't be better but I do see timing as something noteworthy this card offers. — chris_walker 7 Dec 2015
The original Netrunner's City Surveillance triggered when the runner drew a card, had a rez cost of 1, and could be rezzed in response to the card being drawn (including during events that draw multiple cards). The ANR version is definitely less powerful. — Jeffrey Bosboom 8 Dec 2015
Sync is another Synergy option. If you rez it when they have 0 creds, you have just wasted a complete turn for them to clear the tag. Or, if they eat it, flip for 2 free resource trashes if, for some reason, you find yourself without tag punishment in hand. — Sabin76 8 Dec 2015
Thanks Sabin sync definitely syncs with a tag-punishment strategy! — chris_walker 8 Dec 2015
If they have to spend a whole turn getting rid of the tag, it's very likely they'll go tag me, unless they somehow get economy soon after. It's especially good in spark agency denial decks for sure — cmcadvanced 11 Dec 2015